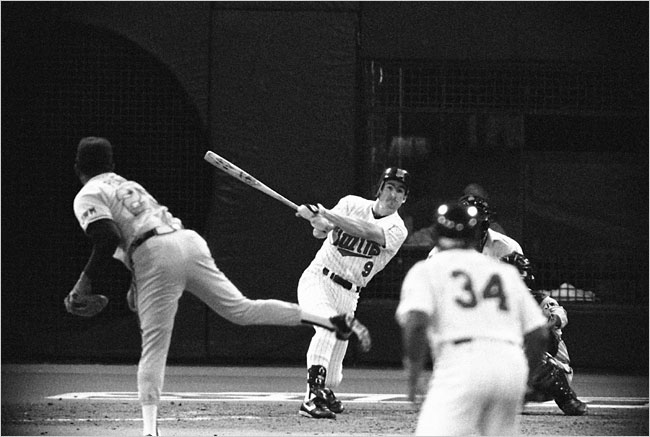 Game Changing Moment--Sid Bream bounces into a 3-2-3 double play to end the top of the 8th inning. This improved the Twins' odds of winning by 29%.

Listening to the games I felt there were an awful lot of triples. Thanks to br's play index, I confirmed those suspicions. 8 triples between the two teams was the most since the 1919 World Series. Also, the five triples (between two teams) in game five is third all-time, behind two different games played during the 1903 World Series. Mark Lemke is also tied for the record with two triples in one game and three in one series.

It took quite a while, at least one commercial break, after this game was over for any players to be interviewed. I kind of like that they waited a while and let the players have their moment first. Today, Morris probably would've had a microphone stuck in his face thirty seconds after Gladden crossed home.

That said, it was peculiar that they were able to interview most of the relevant players (Morris, Puckett, Gladden, etc.) but Larkin never got to say anything (at least in the immediate coverage).

Tom Kelly was awesome in his interview, as always. When asked about Morris going out for the 10th, he said (paraphrased) "He wanted to go out there and I figured, what the heck, it's just a game."

I've really enjoyed watching and discussing this series. Even though I knew virtually everything that was going to happen, I still felt tension and excitement. That's partly credit to the on-field dramatics (the 87 World Series is quite dull for the most part) and partly due to Jack Buck (Joe makes the '01 series very hard to re-watch). I hope you enjoyed this, too.

Herb Carneal's call and a few minutes of talking with Gordo.

If you want to listen to more audio from the World Series, go here.