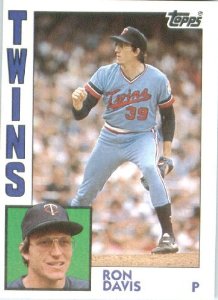 I was only three years old during the 1984 season. I hated eggs and potty training, but I'm sure I had few thoughts on Ron Davis. The first year I paid attention to the Twins was 1987. That was a good year to start, I think.

Now that I'm older, I understood the hatred for Ron Davis, even if it was irrational. I felt somewhat similar in 2001 watching LaTroy Hawkins blow save after save. It wasn't in September, but he was partly responsible for the Twins fading down the stretch. So I understood it. But I didn't get it.

So I decided to try and live it. I bought the 1984 season for Diamond Mind Baseball and played with the hometown team. Unlike Billy Gardner, I knew that Davis wasn't going to be much good. So I didn't use him as often.

Gardner put him out there for 83 innings, while I could only stomach 55. In real life, Davis blew 14 of 43 save opportunities. He thrived even worse for me, blowing 8 of 18 save opportunities. Overall, though, his statistic wound up about the same with a virtually identical WHIP and strikeout rate.

Why did I even let him pitch that often? Well, the main problem with the 1984 Twins was that all of their relief pitchers were terrible. Some of them had decent ERAs, but none of them could be counted on to close anything as difficult as a cupboard door. Thus, I burned through relievers quite a bit, and Lysander and Filson had even worse luck than Davis. Gardner must have hated his relief options as well, since the Twins threw 32 complete games that year. I allowed them to pitch 42.

How did the season go? John Castino was on fire before I lost him to a career-ending injury. Brunansky led the way with 36 homers. Puckett was brilliant on defense, as expected (he had one of the best seasons ever for a centerfielder that year). Hrbek underperformed his near MVP year, though he still played well. The starting pitching was good, despite Butcher and Smithson allowing 69 homers between them.

In an early series against the Angels, the Twins had blown a 9-2 lead to lose 16-14. The next game was more of the same, blowing a 7-2 lead to go down 15-9.  But a Brunansky grand slam and a clutch Darrell Brown single tied it in the 9th. Hrbek walked off the game with a homer to win 16-15.

Instead of fighting the Royals and the Angels for a playoff spot, they only had the Royals to contend with, the Angels somehow finishing with 102 losses in this simulation. The Twins led the division nearly the entire way, but after a three game-sweep at the Royals in early September, the Twins had blown an 8 game lead and were tied.  All dramatics soon vanished, however, when they swept the Royals at home the week after and reeled off 13 wins in 18 days. They lost three games in a row to end the season, but still finished the division with 89 wins (3 ahead of the Royals) and a division championship.

Of course, the 1984 Tigers were waiting. In game one of the ALDS, Viola blew a 2-0 lead late. But the Twins evened it up with a 7-6 victory in game 2, thanks to a Hrbek come-from-behind blast in the 8th. Game 3 was a 4-3 loss, thanks to Smithson and Filson blowing another lead. And Game 4 ended the series, with another 4-3 loss.

One guess as to who gave up that 4th run.

6 thoughts on “The Summer I Learned To Hate Ron Davis”