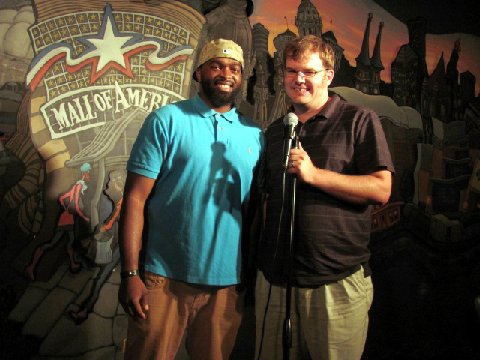 As you all know, for our second anniversary (after the cruise) I decided to do five minutes of stand-up at Rick Bronson's House of Comedy. I don't think I would have had the courage to do this without my wife. My entire family  (including my parents) also came to watch. I'm blessed that they gave me my adult sense of humor and appreciate it.

The video is below, but first, a few highlights:

1. There were 13 guest comedians for open  mic. The closer (Chris Knutson, who was pretty good) was actually the headliner the entire week. I was supposed to go second, which was great. Have someone open, then get up and off the stage before I get too nervous. Well, the first person didn't show. So I was surprisingly called right away. Yikes.

2. The first few guys who followed me were horrendous. One guy was about 70 and just told dirty internet jokes (and he had a lisp). One guy just sadly talked about how awful he was sexually. No jokes, just him berating himself. One guy I'm sure was higher than a kite and kept having to read his cheat sheet to remember his jokes.

3. As mentioned, Fancy Ray was there. For those who don't know who he is, he's a sort-of local celebrity who used to do late night commercials for local sex shops. He also had his own cable show where he interviewed people like Oprah (!). His entire act is him being famous for being famous. He was pretty obnoxious, but then he spent two minutes picking on my dad in the front row. He asked my dad if he had seen him on TV. My dad shook his head, and Fancy said it's probably because he watches too much internet porn. He then said my Dad looked like a 70's swinger who never got laid. Lots of laughs at our table for that.

4. Funniest guy of the night was Brandon Riddley. He had a five-minute bit on how awful his aunt's peanut butter was when he was a kid, and how it almost ruined his life.

5. Favorite one-liner of the night. "So last weekend I hosted a party. The theme was Alien vs. Predator. Only it had a twist. It was Illegal Aliens and Sexual Predators. Wound up just being a mustache party."

6. There was one obnoxious drunk kid in the crowd. He volunteered that he had just had a DWI and his ex-girlfriend's mother was there driving him around. Unfortunately, comedians kept egging him on and this weird relationship and the kid wound up heckling later comedians.

6. The emcee, Greg Coleman, was fantastic. He's in the picture above. He made everyone feel welcome and was pretty funny. He opened the evening with a few jokes, including one where he was convinced he had HIV as a kid, because he misinterpreted some lyrics from an Ice Cube song. I tell you this because it explain my opening joke. Enjoy. (Slightly NSFW due to adult humor and one four letter word)

17 thoughts on “The Night I Opened For Fancy Ray McCloney”