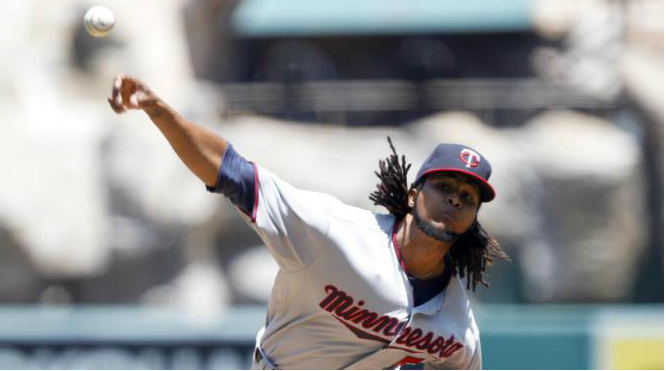 A baseball season is long.  Really long.  You just can't believe how vastly hugely mind-bogglingly long it is.  I mean, you may think it's a long way down the road to payday, but that's just peanuts to a baseball season.  Really.

With the baseball season being as long as it is, no one game is really all that important.  And yet, it felt really important to win this game.  Had the Twins lost, they'd have lost five in a row and five of the six games since the all-star break.  With the prospect of coming home to face the Yankees for three games, it would've raised memories of all the second-half collapses of recent years.  We'd have hoped that perhaps they might not lose ninety games again, but thoughts of a playoff spot could easily have vanished.  Instead, they come home with a win and their heads held high, hoping to take at least one game and maybe two from the mighty Yankees.

The victory, of course, was due in large part to the fine pitching of Ervin Santana.  He went eight innings, giving up only four hits and no walks with seven strikeouts.  He retired twelve men in a row at one point and allowed only one hit after the third inning.  It would've been nice to see him go for the complete game, but Perkins hadn't pitched in a while and he is the closer, so I can understand going to him in the ninth.  As many of you know, I was skeptical of whether Santana should be immediately placed in the rotation, but he pitched well in Rochester and has pitched well in three of his four major league starts, so he certainly proved me wrong.

The offense didn't do a lot, but thanks to Santana's pitching, it was enough.  Trevor Plouffe hit a three-run homer, which was all the offense that was needed.  This is where a commentator is expected to say, "Garrett Richards only made one mistake in the game."  In fact, though, I'm sure he made numerous mistakes, as did Santana, if we're defining "mistake" as "a pitch that didn't go where he wanted it to go".  Every pitcher makes several mistakes during a game, because pitching is just not that easy.  And despite what some would have you believe, they don't all go for home runs, or even for hits.  Sometimes the batter takes the pitch.  Sometimes it's fouled off.  Sometimes it's turned into an out, even if it is hit hard.  And of course, sometimes pitches are hit that are not mistakes, simply because we're dealing with major league batters, who by and large are pretty good.

At any rate, the Twins now come home with, as noted body language expert Dan Gladden would say, a snap in their step.  They come home to play the Yankees, who have won four in a row and eight of their last ten.  By my understanding of the law of averages, that means their about to go into a losing streak, and what better time to start that than tonight?  Phil Hughes goes for the Twins, while Michael Pineda goes for the Yankees.  We've started our season-ending sixty-eight game winning streak!  We're still on track for 118-44!