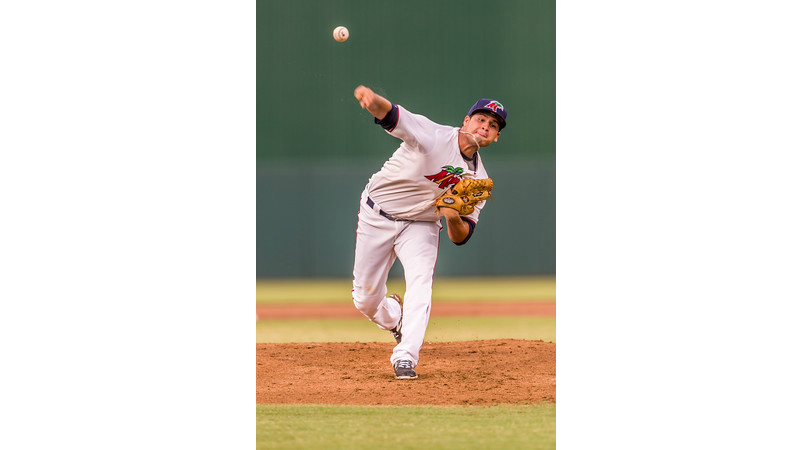 We'll get caught up eventually, although it may be after the season is over.

Not enough offense for Chattanooga.  Omar Bencomo shines for the Miracle.  Ethan Mildren and the bullpen carry the Kernels.  LaMonte Wade hits his eighth for the E-Twins.  Lachlan Wells keeps pitching well in the GCL.  Errors carry the DSL Twins to a win.

Opposition stars:  Kyle Skipworth was 2-for-3 with a run and an RBI.  Ray Chang was 1-for-3 with a double, scoring once and driving in one.  Timothy Adleman pitched 7.1 innings, allowing one run on five hits and three walks with six strikeouts.

The game:  Skipworth singled in a run in the second and the Blue Wahoos scored twice in the seventh to go ahead 3-0.  The Lookouts did not get a hit until the fourth but put two on in the fourth and fifth.  Their lone run scored in the eighth on Kepler's two-out single.  They had the tying run on base in the eighth and brought him up to bat in the ninth.

The game:  There was no score through six, although the Miracle certainly missed a chance in the fifth when Knecht led off with a triple.  In the seventh Garver singled, stole second, and scored on a Wade single for the only run of the game.  The Marauders best scoring chance came in the sixth, when they put men on second and third with two out.

Opposition stars:  Marty Herum was 1-for-4 with a home run, his sixth.  Henry Castillo was 3-for-4.  Wei-Chieh Huang pitched six innings, allowing two runs (one earned) on four hits and two walks with four strikeouts.

The game:  Herum homered leading off the second to give the Cougars a 1-0 lead.  In the fourth, with a man on second and two out, Navaretto circled the bases on a single-plus-error to give the Kernels a 2-1 lead.  That was all the scoring.  The Cougars' best threat after that came in the seventh, when they put men on first and third with one out.

The game:  Young singled in a run in the second and Wade homered in the third to give the Twins a 2-0 lead.  It stayed 2-0 until the seventh, when the Yankees struck for four.  Aparicio had a two-run double, but the Yankees were also helped by four walks and a wild pitch.  The Twins got the tying run on base in the eighth and brought the tying run to bat in the ninth.

Opposition stars:  Ryan Mountcastle was 1-for-4 with a home run, his third.  Jason Heinrich was 1-for-2 with a walk and an RBI.  Nick Vespi pitched three shutout innings, allowing one hit with one strikeout.

The game:  The Twins got one in the first and four in the second, highlighted by Haar's two-run single-plus-error, to go ahead 5-0.  Mountcastle homered in the fourth to put the Orioles on the board and they got back into the game with a three-run sixth in which they were helped by a walk, an error, a hit batsman, and two wild pitches.  They had the tying run on third in that inning, but did not score and did not come that close again.

Pitching star:  Andriu Marin struck out six in three innings, giving up an unearned run on one hit and no walks.

The game:  Cuadrado's two-run double capped a three-run third that put the Dodgers up 3-0.  The Twins came back with one in the third and two in the fourth, in both cases helped by an error, to tie it 3-3.  Paz tripled and scored in the sixth to put the Dodgers ahead 4-3, but the Twins were again aided by an error to tie it 4-4 in the seventh.  In the eighth, Tovar and Darling Cuesto each had an RBI single in a three-run inning that gave the Twins their first lead.  The Dodgers got one in the ninth but did not put the tying run on base.  The Dodgers made five errors in the game, leading to six unearned runs.

Of note:  Yeltsin Encarnacion was 0-for-3 with a run.  Gorge Munoz was 1-for-3 with two runs.  Jadison Jimenez struck out eight in six innings, but gave up four runs (three earned) on eight hits and three walks.