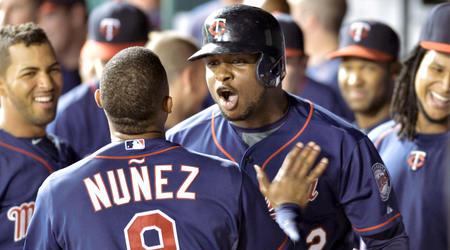 I'm a little bit at a loss here, folks.  When I went to bed last night in the tenth inning, I assumed the Twins were going to lose.  I started thinking about what I was going to write this morning, something along the lines of "that was a game the Twins could've won.  Too bad they didn't".  I'd have never said it in that few words, of course, but that would've been the gist.

So I get up this morning and find out they won.  Now what am I supposed to do?

It was suggested that Pelfrey was pitching for his rotation spot last night, although I never heard Molitor say that.  If he was, I assume Pelfrey will stay in the rotation, because he went 5.1 innings and gave up only one run on five hits and a walk.  It felt like he was in trouble all night, but he really wasn't.  It's just that we've seen him fall apart so quickly that every time a guy gets on base I think "Uh-oh, here he goes."  I suspect Molitor may feel the same way, which would explain the quick hook in the sixth inning.  That and the extra innings meant that Molitor pretty much emptied the bullpen, but with an off-day today he could afford to do that, and they all pitched pretty well.

I'm tempted to complain about the Twins batters once again making a mediocre pitcher look like a Cy Young candidate, but I don't know if that would really be fair.  Kris Medlen was a fine pitcher before he got hurt, and he may well be a fine pitcher again.  This was his first good start of the season, but it might not be his last.  So I think I'll give him the benefit of the doubt here, especially since the Twins won anyway.

As far as Miguel Sano, well, what is there to say?  When you're hamstring is hurting, the best thing to do is hit the ball over the fence so you don't have to run hard around the bases.  Had Sano come up earlier, he probably would've won rookie of the year.  He'll get some votes anyway, but I suspect only being up for half a season will work against him no matter what his numbers are.

Four pinch-runners were used last night, three by the Royals and one by the Twins.  None of them scored.  It's easier to use pinch-runners with expanded rosters, of course, but it still tends to have the effect of taking a good bat out of the lineup.  It was less of a problem for the Twins because they had Plouffe! on the bench, and he's probably a better hitter than Vargas, at least at this point in their careers.  But for the Royals, the effect was to take Zobrist, Gordon, and Moustakas out of the lineup and replace them with Dyson, Infante, and Cuthbert, which is a pretty significant downgrade.

I don't know if anyone has ever studied how often using a pinch-runner actually works.  It'd probably be a hard study to do, simply because there's no way to know what would've happened if you hadn't used one.  My opinion, based on nothing but a lot of years of watching ballgames, is that it rarely makes a difference.  I think that the vast majority of the time, either the pinch-runner doesn't score or something happens that would've allowed the slower runner to score anyway.  So I would very rarely use one.  If you're behind by a run and it's late in the game, sure, then you have to pull out all the stops and make the move even if there is only a slight chance it'll make a difference.  If you're ahead late in the game and you were going to put a fast man in for defense anyway, then yeah, you might as well let the fast man run the bases, too.  But in a tie game, it would be a very rare situation in which I'd be willing to take a good bat out of the lineup for a pinch-runner.  I just don't think it's worth it.

So the Twins take two out of three from the Royals in Kansas City.  That's pretty good.  They climbed back to a game and a half out of first with twenty-three games to play.  They have an off day today, then go to Chicago.  Ervin Santana, who has followed up six lousy starts with two good ones, will go for the Twins against Erik Johnson, who had a fine year in Charlotte and did fairly well in his one major league start this season.  We've started our season-ending twenty-four game winning streak!  We're still on track for 95-67!