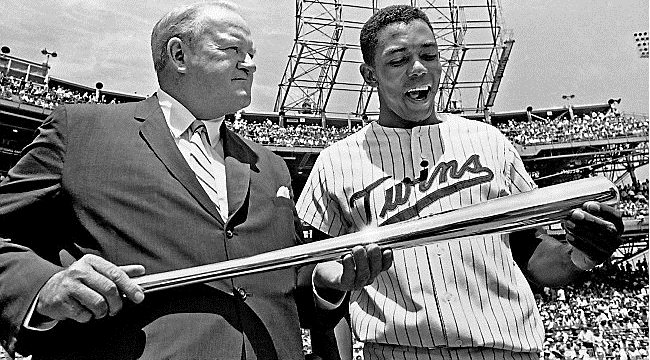 Pitching star:  Johnny Klippstein pitched 3.1 innings of relief, giving up two runs (one earned) on four hits and no walks with no strikeouts.

Opposition stars:  Tony Conigliaro was 3-for-4 with a double and a run.  Bob Tillman was 2-for-3 with a walk, scoring once and driving in one.  Pitcher Earl Wilson was 1-for-1 with a two-run homer, his third.

The game:  Jim Kaat singled in a run in the second and the Twins added two in the third to take a 3-0 lead.  Wilson's two-run homer in the the bottom of the third cut the lead to 3-2, but RBI singles by Killebrew and Earl Battey made it 5-2 in the fifth and Oliva doubled home a run in the sixth to increase the lead to 6-2.  The Red Sox wouldn't go away, as Tillman knocked in two on a single-plus-error in the sixth to narrow the margin to 6-4.  Run-scoring singles by Killebrew and Jimmie Hall made it 8-4 in the eighth, but the Red Sox again tried to come back, scoring two in the ninth and bringing the tying run up to bat with one out.  Carl Yastrzemski grounded out and Tony Horton fanned to end the game.

Of note:  Zoilo Versalles was 0-for-5 with a walk and a run.  Rich Rollins was 2-for-6 with a double and a run.  Hall was 1-for-4 with a walk, scoring once and driving in one.  Battey was 1-for-2 with two walks and two RBIs.  Kaat pitched five innings, giving up four runs (three earned) on nine hits and two walks with three strikeouts.

Record:  The win made the Twins 57-34 and kept them in first place.  Their closest pursuers, Cleveland and Baltimore, each also played a doubleheader.  The Orioles beat Kansas City 1-0 and the Indians lost to Detroit 2-1, so Baltimore took over second place, 3.5 games behind the Twins.

Notes:  Versalles moved back up to the leadoff spot, with Frank Quilici dropping to eighth.  Neither contributed much to the offense in this game...Kaat was going through a bit of a rough stretch, as this was the fifth time in six starts he failed to go as many as six innings.  On the other hand, due to doubleheaders, it was the second time in a row he pitched on only two days' rest...Earl Wilson slugged thirty-five home runs in his career.  His season high was seven, which he hit in 1966 and again in 1968.  He wasn't a bad pitcher either, winning eighteen games in 1966 and twenty-two in 1967, most of them for Detroit.  He finished in the top fifteen in MVP voting in both of those seasons.