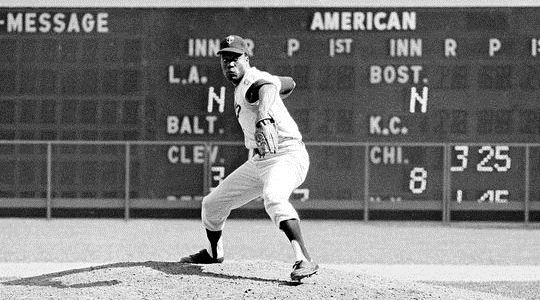 Opposition stars:  John Buzhardt pitched seven innings, allowing three runs on six hits and one walk with three strikeouts.  Hoyt Wilhelm struck out two in two shutout innings, allowing one hit.  John Romano was 1-for-2 with a double and a walk, driving in one.

The game:  A pair of Twins errors and an RBI single by Pete Ward put the White Sox up 2-0 in the first inning.  The Twins got a run back in the third on two singles and a sacrifice fly by Zoilo Versalles.  The score stayed 2-1, with neither team getting much going on offense, until the seventh, when Battey got a one-out single and Hall followed with a two-run homer to give the Twins a 3-2 advantage.  The White Sox did not get a hit after that.

Record:  The Twins improved to 88-54 and took a six game lead over the White Sox.

Notes:  The game was a big one in the pennant race.  The White Sox entered the two-game home series trailing by five games.  A sweep would have brought them within three with nineteen games remaining.  After this game, the best Chicago could hope for was a split, leaving them five games back...Oliva's average fell to .315...Valdespino was again in left field in place of Bob Allison.