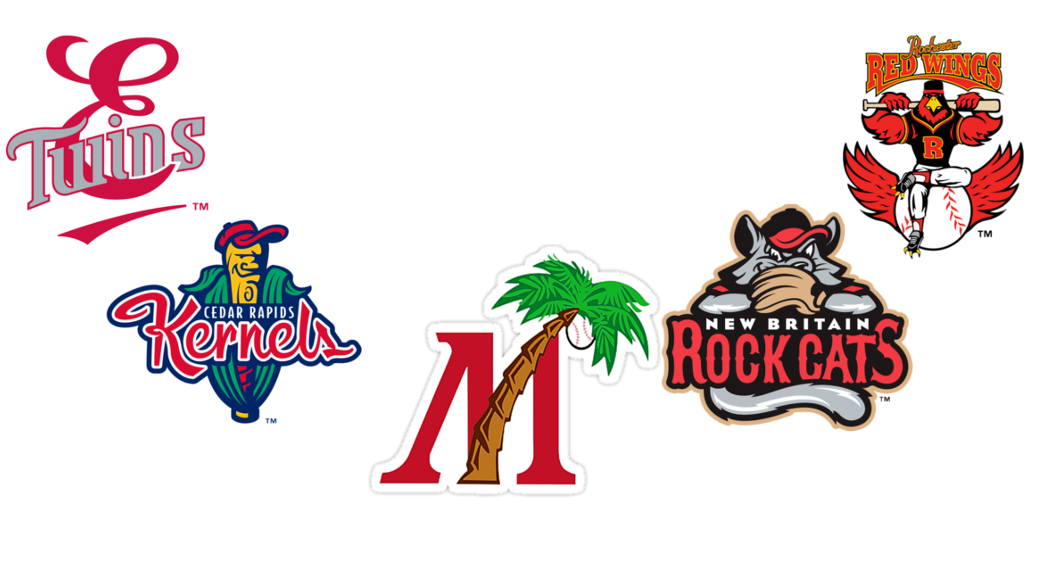 Training 4-1 after eight, the Red Wings made a big comeback, scoring four in the ninth and two in the tenth to win 7-5.  Buck Britton was 4-for-5.  Byron Buxton was 2-for-5 with a home run (his second), raising his average to .313.  Andrew Albers pitched six innings, giving up two runs on eight hits and three walks with five strikeouts.

The Lookouts scored first and led all the way.  Neither team scored more than one run in any inning.  The BayBears put the tying run into scoring position in both the eighth and the ninth.  Stuart Turner and Travis Harrison were each 2-for-4 and Zach Granite was 2-for-5.  Daniel Palka was 0-for-3 with two walks to drop his average to .309.  Omar Bencomo pitched six innings, giving up one run on three hits and a walk with five strikeouts.

Kevin Garcia led off the seventh with a double and came around to score what turned out to be the winning run.  Felix Jorge struck out seven in seven innings, allowing one run on five hits and no walks.  Edgar Corcino was 2-for-3 with a walk.  Nick Gordon again did not play.

Marco Hernandez and Chris Marrero each hit a two-run homer in the first to make it 4-0.  The Red Sox added four more in the sixth.  The Red Wings had only one hit, a two-out single by Kennys Vargas in the first inning.  David Martinez pitched 4.2 innings, allowing eight runs on twelve hits and no walks with three strikeouts.

Kennys Vargas delivered a two-run double in the fifth to put the Red Wings up 3-2.  Jason Wheeler struck out six in five innings, giving up two runs on three hits and four walks.  He now has an ERA of 1.80 and a WHIP of 1.00 with 16 strikeouts in 20 AAA innings.  Marcus Walden struck out three in two shutout innings, allowing two hits.  Max Kepler was 1-for-2 with a triple and two walks.

Two singles and two productive outs produced the only run of the game in the first inning.  The Lookouts had nine hits, but they were all singles and only twice did they get two of them in the same inning.  Aaron Slegers took the tough loss, allowing one run on seven hits and no walks with two strikeouts in six innings.  Leonardo Reginatto and Travis Harrison each went 2-for-4.  Daniel Palka went 1-for-4 to make his average .307.

The Mets did all of their scoring in three innings, getting four in the first, six in the third, and five in the fifth.  Randy Rosario had his first bad game of the season, surrendering ten runs (six earned) on nine hits and a walk in just 2.1 innings.  John Curtiss struck out three in three shutout innings of relief, allowing only a walk, and has now pitched fourteen scoreless innings to start the season (eight in Cedar Rapids, six in Fort Myers).  Tanner Witt was 3-for-4 with a triple.  Edgar Corcino was 2-for-4 with a triple and drove in four runs.  He has twelve RBIs, having driven in four three times and none in his other twenty games.  Nick Gordon is dealing with a concussion and again was held out of the game.

The Kernels trailed 4-1 and 7-3, but a five-run seventh put them over the top.  A. J. Murray had a two-run double and Zander Weil had a two-run single in the inning.  LaMonte Wade was 3-for-3 with a triple and two walks and is now batting .352.  Luis Arraez was 2-for-5 and is batting .310.  Dereck Rodriguez started and struck out six in four innings, allowing only one hit, but was pulled at that point because he had walked six and had thrown 81 pitches.

Byron Buxton homered in the fifth to break a 2-2 tie and lead the Red Wings to a win.  Logan Darnell pitched seven innings, allowing two runs on two hits and three walks with one strikeout.  Buxton's homer was his third.  Kennys Vargas also hit a home run, his second.  James Beresford was 2-for-4.

A single and two walks led to two fifth-inning runs and the Lookouts held on to win.  Ryan Eades had a rare good outing, pitching seven shutout innings while allowing just four hits and two walks with three strikeouts.  Mitch Garver and Leonardo Reginatto each went 2-for-4.  Daniel Palka was 0-for-3 with a walk, dropping his average below .300 at .298.