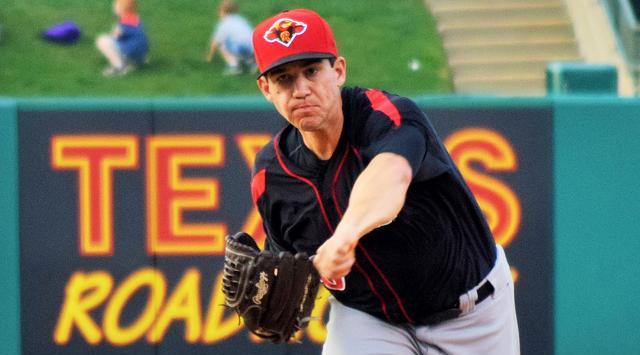 Five out of six!  Strong starts for Tommy Milone and Aaron Slegers.  Better starts for Tyler Jay and Fernando Romero.

A two-run fifth gave the Red Wings a 2-1 lead and they added an insurance run in the ninth.  Tommy Milone pitched seven strong innings, giving up one run on eight hits and two walks with six strikeouts.  Buck Britton was 2-for-3 with a walk.  John Ryan Murphy was 2-for-4 with a double.  Logan Schafer was 1-for-4 and dropped his average to .333 in 24 at-bats.  Jorge Polanco was 1-for-4 and is batting .330.

A three-run fourth, aided by a passed ball and an error, put the Lookouts up 4-0 and they were never threatened.  Aaron Slegers had another good game, going seven innings and giving up two runs on seven hits and one walk with two strikeouts.  Shannon Wilkerson was 3-for-4 with a double.  Leonardo Reginatto was 2-for-5.  Stuart Turner hit a home run, his third.

Tyler Jay pitched six shutout innings, giving up seven hits and two walks with four strikeouts, dropping his ERA to 2.18.  The lone run came in the fourth, when Edgar Corcino had a two-out single and scored on a Chris Paul double.  The Manatees out-hit the Miracle 10-5 but grounded into five double plays.

Two singles, three walks, a wild pitch, and an error plated four first inning runs, which was all the Twins would need.  Wander Javier was 3-for-4 with two doubles.  Humberto Maldonado was 2-for-3 with a double.  Samuel Vasquez was 2-for-4.  Juan Mojica struck out five in four innings, giving up one run on four hits and two walks.

The Giants scored three in the first to take an early lead.  It was only 5-3 through four, but the Giants scored two in the fifth and two more in the sixth.  Jorge Parra was 2-for-3 with a triple to lead the offense.  Luis Bellorin started but pitched only one inning, allowing three runs on three hits and one walk with two strikeouts.