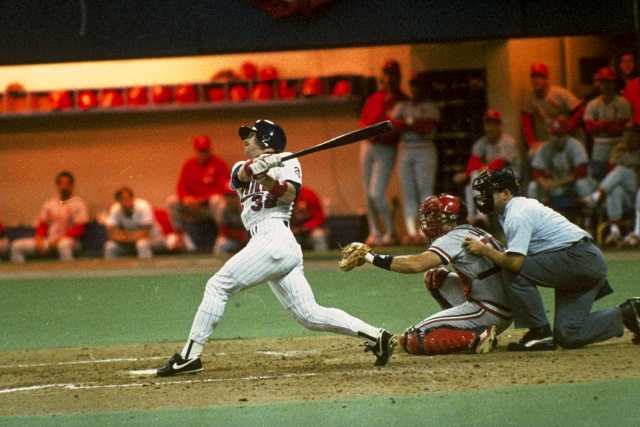 Batting stars:  Dan Gladden was 2-for-5 with a grand slam, a double, and a stolen base, driving in five.  Steve Lombardozzi was 2-for-3 with a two-run homer and a walk, scoring three times.  Kent Hrbek was 1-for-2 with two walks, scoring twice and driving in two.

Opposition stars:  Jim Lindeman was 2-for-4 with a double and a run.  Willie McGee was 2-for-3.

The game:  The Cardinals got on the board in the second inning, as Lindeman led off with a double, went to third on a fly ball and scored on Tony Pena's ground out.  In the fourth, however, the Twins took control.  Singles by Gary Gaetti, Tom Brunansky, and Don Baylor loaded the bases with none out and Hrbek hit the fourth consecutive single to drive in two and put the Twins ahead.  Lombardozzi walked to again load the bases, which got St. Louis starter Joe Magrane a trip to the showers.  Bob Forsch came in and immediately gave up an RBI single to Tim Laudner and a grand slam to Gladden.  The slam killed the rally, but no one cared as the Twins had a 7-1 lead.  Lombardozzi hit a two-run homer in the fifth to make it 9-1.  The Twins scored their final run in the seventh when Lombardozzi singled and Gladden doubled him home.

Notes:  Gladden and Lombardozzi were probably the least likely Twins to hit home runs, as each hit only eight during the season...Magrane was in his rookie season in 1987 and was just twenty-two years old.  He had done well for the Cardinals, going 9-7, 3.54, 1.27 WHIP in 26 starts (170.1 innings).  There was controversy about going with a pitcher that young in Game 1, but he had the lowest ERA and the lowest WHIP of any of the St. Louis starters.  Danny Cox and John Tudor were unavailable due to their use in the NLCS, so the only other real choices were Greg Mathews and Forsch, who came on in relief in this game...Lindeman played first base and batted fourth for St. Louis.  I have zero memory of him.  He was a part-time player for the Cardinals from 1986-89 and was in the majors for at least parts of seasons through 1994, playing for Detroit, Philadelphia, Houston, and the Mets.  He played corner outfield as well as first base.  1987 was the year he saw his most major league playing time, appearing in 75 games and getting 207 at-bats.  He batted .208/.253/.386 that season.  For his career, he appeared in 351 games, got 676 at-bats, and batted .244/.289/.391.  His best season was 1991, when he batted .337/.413/.389 in 95 at-bats for Philadelphia.  The Cardinals' regular first baseman in 1987 was Jack Clark, who was unavailable in the World Series due to an ankle injury.

Record:  The Twins took a 1-0 lead in the best-of-seven series.