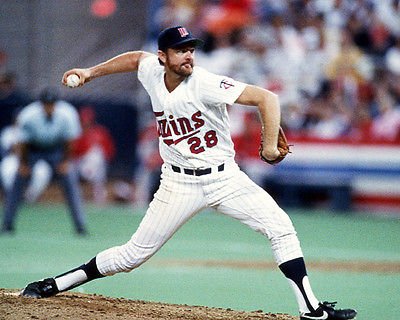 The game:  The Twins once again jumped on the Cardinals with a big fourth inning.  They took a 1-0 lead in the second on a home run by Gaetti.  In the fourth, singles by Kirby Puckett and Kent Hrbek and a walk to Gaetti loaded the bases with one out.  Bush then hit a two-run double to give the Twins a 3-0 lead.  An intentional walk to Tom Brunansky loaded the bases.  Steve Lombardozzi hit a short fly ball for the second out, but Laudner had a two-run single and Dan Gladden followed with an RBI single, making it 6-0 and chasing St. Louis starter Danny Cox from the game.  Greg Gagne greeted reliever Lee Tunnell with a run-scoring double to make it 7-0 and the Twins were in control the rest of the way.  The Cardinals got on the board in the fifth on an RBI ground out, but Laudner got the run back for the Twins with a home run in the sixth.  St. Louis got one in the seventh and two in the eighth to make the final score look better, but the Cardinals never even got the tying run to the on-deck circle.

Notes:  Tim Laudner was another unlikely batting hero for the Twins...Doing this series has made me realize how important Randy Bush was to the 1987 team.  Not that he was the team MVP or anywhere near it, but he was a solid contributor as a part-time player...I don't remember if this was the game where Whitey Herzog started whining about Blyleven not coming to a stop in his stretch, but it probably was.  For a great manager (and he truly was--six time in the LCS, three times in the World Series, one world championship), it seems to me that Herzog whined an awful lot...Dan Driessen was the Cardinals first baseman and fourth place batter in this game.  At the end of a fine career, Driessen had gone unsigned until June, when the Cards signed him and sent him to AAA, bringing him to the majors in September.  He batted .233/.309/.317 for them in sixty at-bats.  Losing Jack Clark was obviously a major blow to the St. Louis championship hopes...Ford was the Cardinals primary right fielder, but he only played in 89 games and had 228 at-bats.  They never really did find a right fielder that year, playing David Green, Lance Johnson (at age 23 and in his first season), Tito Landrum, Jim Lindeman, and John Morris at the position.

Record:  The Twins led the best-of-seven series 2-0.  Now, however, the series would move to Busch Stadium in St. Louis.  Would the Twins be able to win a World Series game on the road?  We shall see.