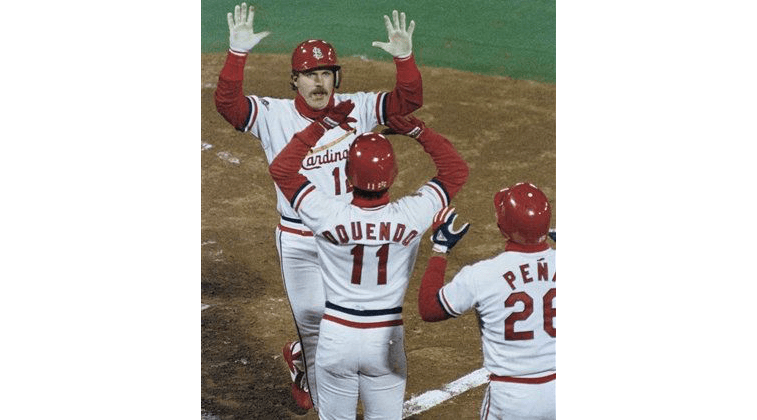 The game:  Gagne homered in the top of the third to give the Twins a 1-0 lead, but Lindeman singled in a run in the bottom of the third to tie it 1-1.  For the third time in four games, a big fourth inning made the difference.  This time it was the Cardinals who broke the game open in the fourth, scoring six runs.  Tony Pena walked, Jose Oquendo singled, and Lawless delivered a three-run homer to give St. Louis a 4-1 lead.  Frank Viola retired St. Louis pitcher Bob Forsch, but after walking Vince Coleman he was replaced by Dan Schatzeder.  He struck out Ozzie Smith, but Coleman stole second, leading to an intentional walk to Tom Herr.  Lindeman came through with another RBI single and McGee followed with a two-run double, making the score 7-1.  The Twins got a run back on Puckett's RBI single in the fifth.  They had the bases loaded with one out in the seventh, but Ken Dayley came in to strike out Gary Gaetti and retire Tom Brunansky on a foul popup.  The Twins did not threaten again.

Notes:  As those of us who were around will recall, Lawless was the least likely of any player on either team to hit a home run, possibly including the pitchers.  A seldom-used reserve infielder, he was playing third base because of an injury to Terry Pendleton.  He had played in only 19 games in 1987 and had only 25 at-bats, with a line of .080/.179/.120.  He had hit one major league home run in his career up to that point, in 1984 when he was with Cincinnati.  He would hit only one more, in 1988.  Over a nine-year career, he batted .207/.263/.258 in 531 at-bats...Tom Kelly elected to bring Viola back on short rest rather than go with Niekro.  Viola lasted only 3.1 innings, giving up five runs on six hits and three walks with four strikeouts.  Niekro pitched two scoreless innings of relief.  I don't remember if that led to second-guessing, but I remember that at the time I thought TK made the right decision and it just didn't work out...Lindeman's two hits made him 4-for-8 in the series to this point...St. Louis starter Greg Mathews came out after just 3.2 innings, giving up one run on two hits and two walks with three strikeouts.  I suspect he was injured--if not it was a really quick hook--but I could not quickly find out and did not have time to research the matter.

Record:  The best-of-seven series was tied 2-2.  Would Bert Blyleven be able to stop the Cardinals momentum and give the Twins their first road World Series win?  We'll see tomorrow.