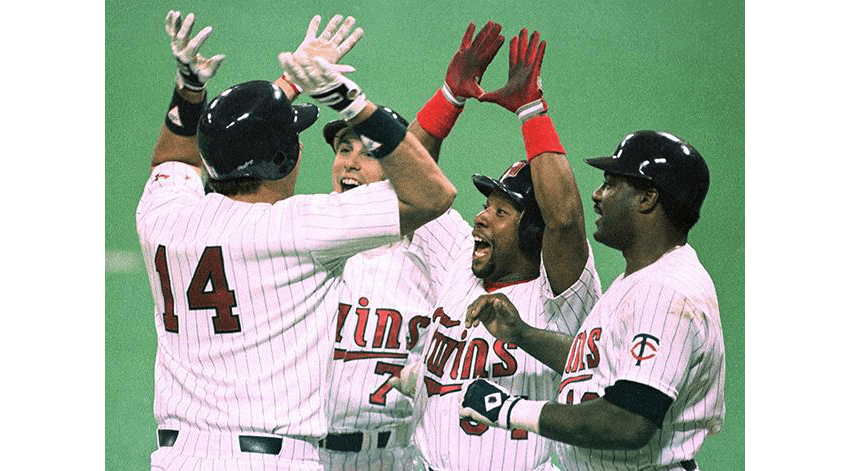 Opposition stars:  Tom Herr was 3-for-5 with a home run.  Terry Pendleton was 2-for-3 with a walk and two stolen bases, scoring once and driving in one.  Willie McGee was 2-for-4 with a run and an RBI.

The game:  Herr homered in the first inning to put the Cardinals up 1-0.  The Twins came back with two in the bottom of the first.  Dan Gladden led off with a triple and scored on a single by Puckett.  He went to second on a ground out and scored on a Baylor single.  Jose Oquendo singled in a run in the second to tie it 2-2.  In the fourth, Dan Driessen led off with a double, went to third on McGee's single, and scored on an infield single by Pendleton to give St. Louis a 3-2 lead.  That ended the day for starter Les Straker, as Dan Schatzeder came in.  He gave up a sacrifice fly to Oquendo to give the Cardinals a 4-2 advantage.  It went to 5-2 in the fifth on McGee's RBI single, and Twins fans could be forgiven if they started to think their magical season was coming to a close.

The Twins were not to be denied, however.  Puckett led off the fifth with a double and scored on Gary Gaetti's single to cut the lead to 5-3.  Baylor followed with a two-run homer, tying the game 5-5.  The home run did not kill the rally, as Tom Brunansky singled, went to second on a ground out, and scored on a Steve Lombardozzi single, giving the Twins a 6-5 lead.  In the sixth, Greg Gagne led off with an infield single and Puckett walked.  A passed ball advanced the runners.  With one out, Baylor was intentionally walked.  With two out, the Cardinals brought in Ken Dayley to face Hrbek.  Hrbek greeted him by slamming his first pitch over the center field fence, putting the Twins ahead 10-5.  Berenguer and Reardon slammed the door on St. Louis, the Twins added a run in the eighth, and the stage was set for a deciding game seven.

Notes:  I had forgotten how much the Twins used Dan Schatzeder in the post-season.  He pitched in five of their twelve post-season games, throwing 8.2 innings.  Other than game four of the World Series, he did pretty well, too...Straker pitched only three innings, giving up four runs on five hits and a walk with two strikeouts...St. Louis starter John Tudor didn't do much better, pitching four innings and giving up six runs on eleven hits and one walk with one strikeout...Hrbek's grand slam was the only run Ken Dayley gave up in the 1987 post-season.

Record:  The World Series was tied 3-3.  The Twins would send ace Frank Viola to the mound against Cardinals rookie Joe Magrane.  One game would decide the world championship.  How would it go?  We'll see tomorrow.