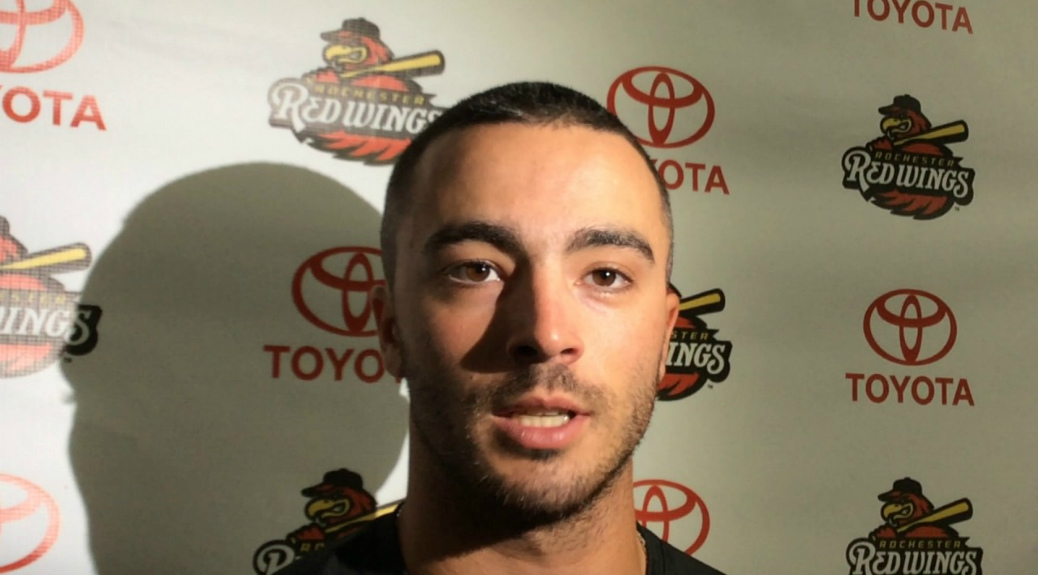 An organizational sweep!  Zack Granite keeps hitting as Phil Hughes pitches in consecutive games.  Alex Perez has a great AA debut as the Lookouts take a doubleheader by identical scores.  A big day for Max Murphy.  Clark Beeker comes back to pitch well.  Lots of successful debuts for Elizabethton.

Trailing 3-2 in the fifth, the Red Wings got two doubles, a single, and another double to take a 5-3 lead.  The IronPigs closed to 5-4 in the sixth, but Matt Hague hit a two-run homer in the seventh to put the game out of reach.  Lehigh Valley did not get a hit after scoring in the sixth inning.  Ex-Twin Pedro Florimon was 1-for-5 for the IronPigs and is batting .278.

Tim Melville struck out six in five innings, but allowed three runs on four hits and two walks.  Phil Hughes, pitching on back-to-back days, gave up a run on two hits.  Drew Rucinski struck out two in two perfect innings, dropping his ERA to 1.74.  His WHIP is 0.77 and he has 28 strikeouts and 3 walks in 31 innings.  Michael Tonkin struck out three in a scoreless inning, to make his ERA 2.81.  He has 23 strikeouts in 16 innings.  Hague was 2-for-3 with a home run (his sixth) a double, and a walk.  ByungHo Park was 2-for-3 with a walk.  He is batting .378 in his last ten games, raising his average to .231.  Zack Granite was 2-for-4 with a home run (his third) and a walk, raising his average to .360.  J. B. Shuck and Leonardo Reginatto were each 2-for-4 with a double.

Travis Harrison homered in the second to start the scoring.  LaMonte Wade had a two-run single in the fourth.  Brian Navaretto had an RBI single in the fifth and Andy Wilkins brought home two with a single in the sixth.

Dereck Rodriguez struck out six in six innings, giving up two hits and two walks.  Paul Clemens struck out three in a scoreless inning.  Wilkins was 3-for-4 with a double and is batting .324.  Alex Perez made his AA debut and was 2-for-3.  Wade was also 2-for-3.  Ryan Walker was 2-for-4.  Brian Navaretto made his AA debut and was 1-for-3.  Edgar Corcino was 1-for-1 with three walks and is batting .304.

The Lookouts scored in each of the first five innings to win the second game by an identical score to the first.  T. J. White had an RBI single in the first and a run scored on an error in the second.  Levi Michael doubled home two in the third, a sacrifice fly scored one in the fourth, and Travis Harrison singled in a run in the fifth.

Fernando Romero pitched a seven-inning complete game, giving up three runs and three walks with six strikeouts.  His ERA is now 2.97.  Alex Perez was 3-for-3, making him 5-for-6 in the doubleheader.  Harrison was 2-for-2 with a double and a walk.  Nick Gordon was 2-for-3 with a walk and is batting .311.

The Miracle scored two in the first and one in the second to take a 3-0 lead, but the Fire Frogs got three in the bottom of the second to tie it 3-3.  In the third, Mitchell Kranson doubled home a run and scored on a Zander Weil single to put Fort Myers ahead to stay.  The Miracle added single runs in the fourth, fifth, and eighth.

Anthony McIver pitched five innings, giving up three runs on six hits and no walks with four strikeouts.  Keaton Steele pitched two shutout innings.  David Fischer pitched a scoreless inning.  Andrew Vasquez struck out all three batters he faced, keeping his ERA at zero.  He has 15 strikeouts and 1 walk in 8 innings and has a WHIP of 0.63.  Max Murphy was 4-for-5 with a home run, his fifth, and is batting .302.  Jaylin Davis was 2-for-4.  Kranson was 2-for-5.

Amaurys Minier doubled home a run in the first to give the Kernels the early lead.  In the fourth, Caleb Hamilton and Ben Rortvedt led off with back-to-back homers, and a sacrifice fly later in the inning made it 4-0.  The River Bandits got their lone run in the fifth, but a two-run seventh by Cedar Rapids put the game out of reach.

Four three-run innings carried the Twins to victory.  Jordan Gore's two-run double capped a three-run fourth that put Elizabethton up 3-1.  The Braves tied it with two in the top of the fifth, but Mark Contreras led off the bottom of the fifth with a home run and Brent Rooker hit a two-run homer later in the inning to make it 6-3 Twins.  They added three in the sixth and three in the eighth to put the game out of reach.