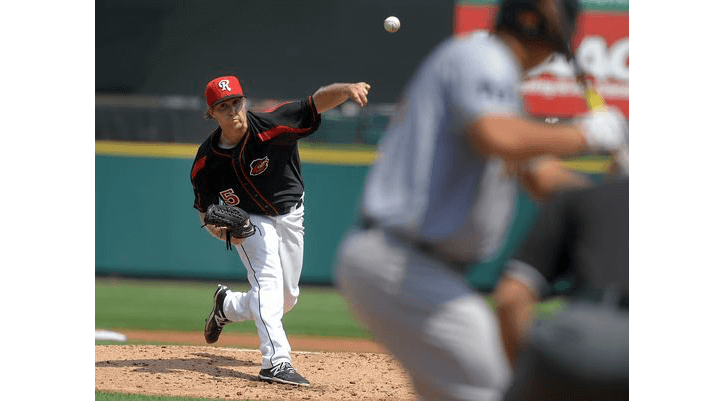 A fine game by David Hurlbut.  A near cycle by T. J. White and a fine game by Zack Littell.  Lewis Thorpe also had a fine game in a loss.  A fine comeback for the Kernels.  Not much was fine for the E-Twins.  The GCL Twins roll along into the playoffs.  The DSL Twins face a must-win game today.

Miguel Andujar's RBI double put the RailRiders up 1-0 in the first, but the Red Wings took over from there.  They scored three runs in the fourth, as Daniel Palka's run-scoring triple tied the score, ByungHo Park singled home the go-ahead run, and Anthony Recker had an RBI double to provide an insurance run.  Rochester got two more in the sixth, as Leonardo Reginatto brought home a run with a double and later scored on a sacrifice fly.  Scranton/Wilkes-Barre did not get a hit after the sixth inning.

David Hurlbut pitched 6.1 innings, giving up a run on four hits and two walks with five strikeouts.  Drew Rucinski retired all five men he faced, striking out two of them, to drop his ERA to 2.66 with a WHIP of 0.98.  Michael Tonkin pitched a scoreless inning to lower his ERA to 1.73 with 61 strikeouts in 41.2 innings.  Palka was 2-for-3 with a triple and two walks.  Recker was 2-for-3 with a double.  Park and Matt Hague were each 2-for-5.

T. J. White tripled and scored in the fourth to tie the score 2-2.  The Lookouts took the lead in the fifth on two singles and a sacrifice fly.  They then broke the game open with a five-run seventh.  Nick Gordon hit a three-run homer and White hit a two-run homer in the inning.  They added three runs in the eighth on four walks and a two-run single by Edgar Corcino.

Zack Littell pitched six innings, giving up two runs (one earned) on two hits and three walks with four strikeouts.  His ERA is 2.81.  Anthony McIver struck out two in two shutout innings to keep his ERA at zero with a WHIP of 0.83.  Nick Anderson struck out two in a perfect inning to make his ERA 0.83 with a WHIP of 0.73 and 36 strikeouts in 32.2 innings.  T. J. White fell a single short of the cycle, going 3-for-5 with a double, a triple, and his fourteenth home run.  Alex Perez was 2-for-3 with a walk and three runs.  Corcino was 2-for-4 with three RBIs.  Gordon was 2-for-5 with his ninth home run and three RBIs.

Trailing 2-1 going to the ninth, the Miracle loaded the bases with a walk and two errors.  A sacrifice fly tied the score.  An infield single re-loaded the bases, but a force out at the plate and a fly out ended the inning.  In the eleventh, a single-plus-error and a walk put men on first and second for the Hammerheads with none out.  The next two batters were retired, but Angel Reyes delivered a single-plus-error to win the game for Jupiter.  Each team made four errors in the game.

The Bees scored six runs in the third to take an 8-0 lead.  Artemis Kadkhodaian had a two-run single and Stephen Kerr a two-run double in the inning.  The Kernels scored once in the third and tied it with seven runs in the fifth.  Shane Carrier had a two-run homer and Travis Blankenhorn a two-run single in the inning.  There was no more scoring until the tenth.  Burlington had the bases loaded with two out but did not score.  In the bottom of the tenth Jordan Gore singled, took second on a passed ball, and scored on an Aaron Whitefield double to win the game.

Moises Gomez struck out three in three shutout innings, giving up one hit and no walks.  Jared Finkel struck out all three batters he faced to drop his ERA to 2.18.  Akil Baddoo was 1-for-4 and is batting .357.

Jared Akins hit a two-run double in the third and came around to score later to make the score 3-0 Twins.  Jake Fraley homered in the fourth to make it 3-1, but the Twins scored three more in the fifth, getting an RBI single by Benjamin Rodriguez and two sacrifice flies, to put the game out of reach.

The Dodgers2 scored on a wild pitch in the second and got an RBI single by Luis Yanel Diaz in the sixth to make it 2-0.  The Twins got a man to third base with none out in the third and one out in the fourth but failed to score.  They then had their last sixteen batters retired.  The Dodgers2 scored five runs in the ninth, with Frank Sanchez hitting a three-run homer, to put the game out of reach.

Michael Montero struck out five in five innings, giving up one run on six hits and no walks.  The Twins had only five hits and drew one walk.  The series is best-of-three, so the Twins will need to win today to keep their championship hopes alive.

Rochester is in first place in the wild card race, leading Lehigh Valley by two games.  Their magic number is three.
Chattanooga qualified for the playoffs by winning the first half and has now clinched the second half championship.  They lead Montgomery by six games.
Fort Myers is in first place in the second half, leading Charlotte by three games.  Their magic number is one.
Cedar Rapids qualified for the playoffs by finishing second in the first half.  They are in third place in the second half, trailing second-place Peoria by one game.
Elizabethton had clinched their division.  They lead Greeneville and Johnson city by 7.5 games.  The Twins will play Greeneville in the first round of the playoffs Saturday in the first game of a best-of-three series.
The GCL Twins have clinched their division.  They lead the GCL Orioles by 7.5 games.
The DSL Twins won their division, but trail the DSL Dodgers2 in the playoff semi-finals one game to none.