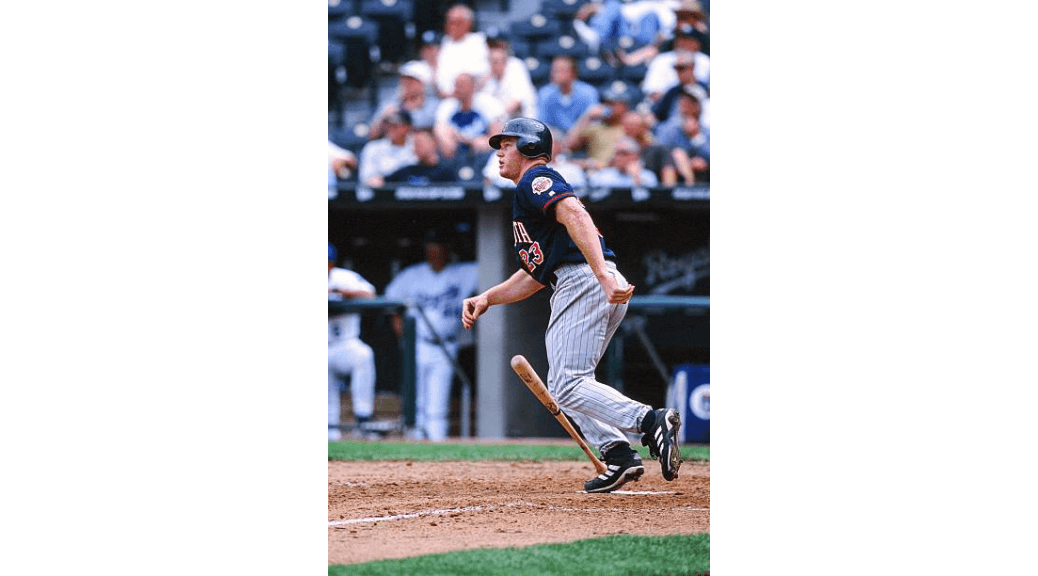 Pitching stars:  Eric Milton pitched 6.2 innings, giving up one run on six hits and a walk and striking out three.  LaTroy Hawkins pitched a scoreless inning, giving up one hit.

Opposition stars:  Jim Thome was 2-for-3 with a home run (his forty-eighth) and a walk.  Chris Magruder was 2-for-4.  Ellis Burks was 1-for-2 with a two-run homer, his thirty-first.

The game:  It was scoreless until the bottom of the third.  The Twins scored one on a ground out and Ortiz had an RBI single to give the Twins a 2-0 lead.  Thome homered leading off the fourth to cut the lead to 2-1.  In the fifth, Kielty tripled and scored on an error to make it 3-1.  Burks hit a two-run homer in the eighth to tie it 3-3.  In the ninth, PIerzynski led off with a double and was pinch-run for by Michael Ryan.  A bunt moved Ryan to third and two intentional walks loaded the bases.  Bobby Kielty then hit a fly ball to short left field.  Ryan showed why using a pinch-runner was a good idea by tagging up and scoring the winning run.

Notes:  Jacque Jones was again out of the lineup, with Dustan Mohr in left field and leading off.  He was 0-for-3 with a sacrifice fly and two walks.

Torii Hunter was back in the lineup in center field.  He went 0-for-4.

Michael Cuddyer was the right fielder.  He went 1-for-3.

Pierzynski held his average at .304.

Kyle Lohse made his only relief appearance of the season.  He pitched a third of an inning, allowing two runs on a hit and a walk.

Cleveland starter Ricardo Rodriguez made his seventh career start and his last of the season.  He pitched six innings, giving up three runs on four hits and three walks and striking out four.  He started the 2003 season with the Indians and pitched well in his first four starts, but not well after that.  He made fifteen starts before missing the rest of the season due to injury, so we'll never know if he'd have had a full season in the majors otherwise.  If he had, it would've been his only one.  He moved on to Texas for 2004 and got about a month in the majors.  He actually did pretty well, throwing a complete game shutout against his former team.  He got about two months with the Rangers in 2005 and pitched well at times, but not often enough.  That ended his major league career.  His numbers are 10-15, 5.18 in 206.2 innings (39 games).  He kept pitching for quite a while after that, playing winter ball in the Dominican Republic through 2011.

One thought on “2002 Rewind: Game One Hundred Fifty-six”