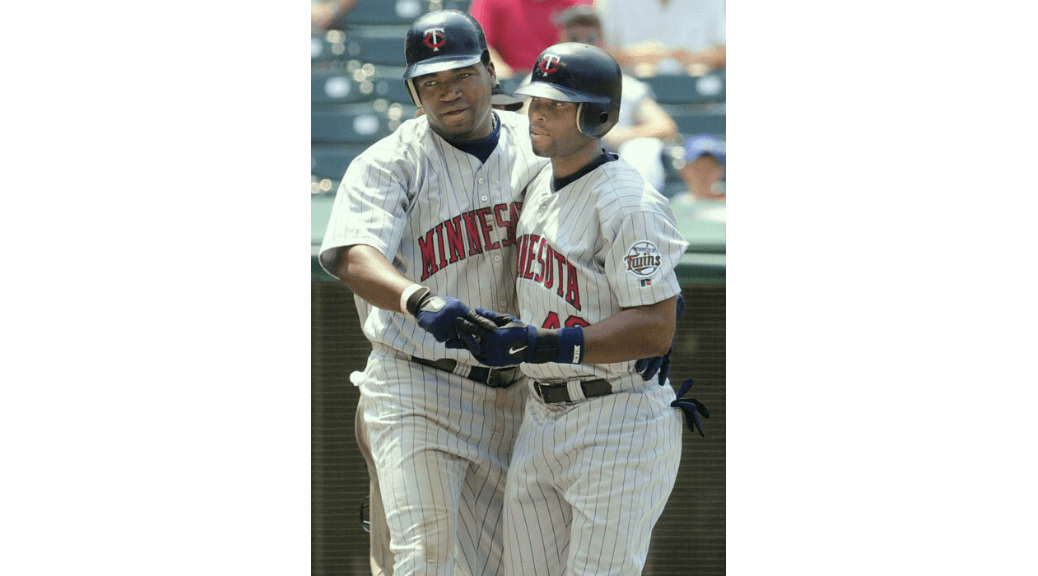 Opposition stars:  Ellis Burks was 4-for-6 with a home run (his thirty-second) and three runs.  Jim Thome was 2-for-4 with two home runs (his forty-ninth and fiftieth), two walks, three RBIs, and a stolen base (his first).  Victor Martinez was 2-for-5.

The game:  Thome hit a two-out two-run homer in the first inning to give the Indians a 2-0 lead.  The Twins got a two-run single from A. J. Pierzynski in the second to tie it 2-2.  Cleveland loaded the bases with none out in the third but only scored once, on a Bill Selby sacrifice fly, to take a 3-2 advantage.  Cristian Guzman and Hunter had back-to-back doubles in the bottom of the third to tie it 3-3.  Thome hit his second homer of the game leading off the fifth to put the Indians back in front 4-3.  Cuddyer hit a leadoff home run of his own in the seventh to tie it 4-4.  Another home run in the ninth, this time by Burks, put the Clevelands back up 5-4.  Cuddyer delivered an RBI single in the ninth to tie it 5-5.  The Twins had the bases loaded with two out in the tenth but did not score.  Not to worry.  With one out in the twelfth, Ortiz launched a two-run homer to win the game.

Notes:  Dustan Mohr was again in left field and leading off in place of Jacque Jones.  He went 0-for-6.

Cuddyer was at third base, replacing Corey Koskie.

Pierzynski went 1-for-4 and his average remained .304.

Thome's stolen base was his first since 2000.  He had nineteen stolen bases in his career.  His season high was four, in 1995.  His last stolen base, and in fact his last stolen base attempt, was in 2008.  In this game, his stolen base came in a key situation--he was on first with one out in the ninth with Cleveland leading 5-4.  The steal of second put him in position to score an important insurance run, but a pair of fly outs followed.

This was Victor Martinez' rookie year, as he got a September call-up.  He would come to the big leagues to stay in late June of 2003.

This was the second big league start for Cleveland's Brian Tallet.  He pitched six innings, giving up three runs (two earned) on five hits and a walk and striking out four.  Tallet struggled for a while, but became a valuable relief pitcher for Toronto from 2006-2008.  For some reason, the Blue Jays moved him into the starting rotation in 2009.  Not only was he bad as a starting pitcher, he was never a useful pitcher again.