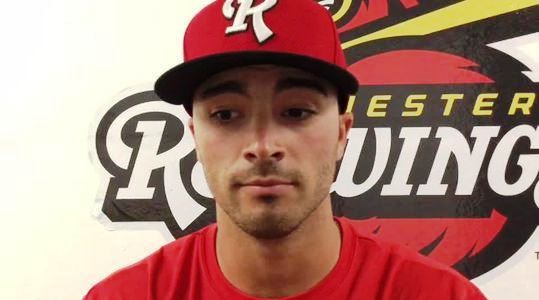 A solid game for Zack Littell.  A better game for Lewis Thorpe.  Charlie Barnes pitches well, too.  Ben Rodriguez hits an inside-the-park homer to lead the Kernels.  Lots of batters off to good starts for the E-Twins.  Anthony Escobar has the best game of them all.

The Chiefs scored one in the ninth to send the game to an extra inning.  Syracuse failed to score in the top of the tenth, getting two strikeouts, a single that only sent the runner to third, and another strikeout.  In the bottom of the tenth, Zack Granite delivered a one-out single to bring home the winning run.

Granite did not start, but replaced Byron Buxton in the field as the tenth inning started.  I don't know why.  Buxton was 1-for-3 and struck out twice.

The Lookouts scored three runs in the first inning and led all the way.  The Shuckers did not get on the board until the ninth.

With the Kernels trailing 4-3 in the sixth, Ben Rodriguez hit a two-out two-run inside-the-park home run to put Cedar Rapids in the lead to stay.  The last eight Timber Rattlers were retired, five of them on strikeouts.

Randy Dobnak pitched 6.1 innings, giving up four runs on nine hits and a walk and striking out three.  Jovani Moran pitched 2.2 perfect innings, striking out five of the eight batters he faced.

The Twins had leads of 3-1 and 4-2, but it took a three-run seventh to break a 4-4 tie and put them in the lead to stay.  Ryan Jeffers doubled home the lead run.

All five runs came in the fifth inning.  Wander Valdez hit a three-run triple and scored on a Francisco Martinez single.  The lone Yankee hit came leading off the ninth inning.

But the star was Anthony Escobar, who pitched seven no-hit innings, walking one and striking out three.  He faced the minimum twenty-one batters, as they man he walked was caught stealing.  He has an ERA of 0.68 and a WHIP of 0.56 in 26.2 innings.  He has given up just 10 hits and opposing batters are batting .114 against him.  Yolby Guzman pitched two shutout innings, giving up a hit and a walk and striking out one.