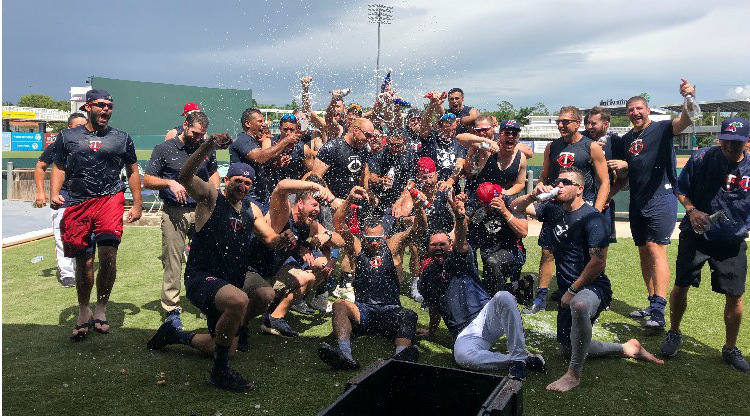 With the Red Wings leading 4-2, Danny Ortiz hit a three-run homer in the seventh to give the IronPigs a 5-4 lead.  Rochester came back in the ninth, with Zander Wiel hitting a two-run walkoff homer to win it.

The Generals scored single runs in the fourth and eighth.  The lone Lookouts run came in the ninth.  They had the tying run at first with one out.

Jimmy Kerrigan was 2-for-4.

Austin Adams was the opener, striking out three in two shutout innings.  He gave up one hit and has an ERA of 1.00.  Anthony Marzi then pitched 4.2 innings, giving up one run on five hits and no walks.

The Miracle scored both their runs in the fourth, one on a single by Aaron Whitefield and the other on a stolen base-plus-error by Shane Carrier.  The Threshers scored their lone run in the sixth on a hit batsman and two singles.  They had the tying run on second, but did not get a man on base the rest of the game.

The Kernels got back-to-back homers by Ariel Montesino and Jacob Pearson in a three-run fifth that tied it 4-4.  The Snappers came back with two in the seventh, aided by two errors, and scored three in the eighth to put the game out of reach.

Akil Baddoo was 2-for-2 with two doubles.  Pearson was 1-for-3 and the home run was his seventh.  Montesino was 1-for-4 with a home run.

Randy Dobnak pitched two innings, giving up one run on two hits and no walks and striking out one.

Gilberto Celestino delivered a two-run single in the fifth to give the Twins a 3-1 lead.  It was 3-2 after six, but a sacrifice fly made it 4-2 after seven and Yunior Severino singled home a run in the eighth to put the game out of reach.

Fort Myers tied for first with Charlotte, but won the head-to-head series and so is awarded the division championship.  They will play Palm Beach in the first round of the playoffs.
Cedar Rapids has clinched the division, leading Quad Cities by five games with one game to play.
Elizabethton won it's playoff series with Kingsport two games to one.  They will play Princeton in a best-of-three series for the league championship.  The league website indicates that the playoff series begins Wednesday, but the E-Twins broadcaster said it would start Tuesday, so I don't know who's right.