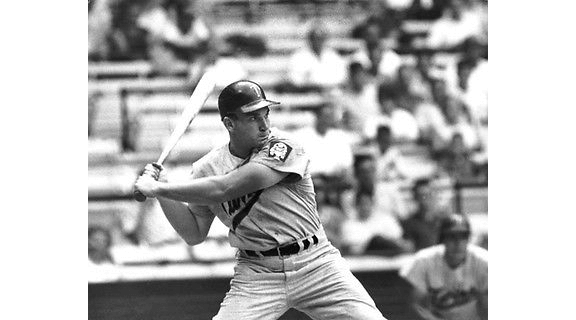 Pitching star:  Ron Perranoski pitched 1.1 scoreless innings, giving up one hit and striking out one.

The game:  The Tigers got a pair of one out singles in the first but did not score.  The Twins scored twice in the bottom of the first.  Uhlaender led off with a single-plus error and was on third with two out.  Killebrew delivered an RBI double and Reese hit a run-scoring single to make it 2-0 Minnesota.

Detroit got on the board in the third as Stanley singled and scored from first on Matchick's double.  The Twins got the run back in the fourth when Johnny Roseboro doubled and Tovar singled, making he score 3-1.

The Twins broke it open with seven in the fifth.  Carew led off with a single and Oliva followed with a two-run homer.  Killebrew walked and went to third on Reese's double.  With one out, Tovar was intentionally walked.  It didn't work,as Cardenas came through with a two-run single.  With two-out, Uhlaender hit a two-run triple and scored on Carew's single.  The score was 10-1 Twins.

The Tigers put together three singles with one out in the fifth, loading the bases, but could only score one on a force out.  The Twins got the run back in the sixth when Killebrew homered, making the score 11-2.

The Tigers scored three in the eighth off starter Bob Miller.  Brown led off with a walk and Cash hit a two-run homer.  With two out, Wert homered to bring the final score to 11-5.

Notes:  Uhlaender was in left in this game.  Killebrew was back at third, with Rich Reese at first.  Frank Quilici replaced Killebrew at third in the seventh inning.

Miller made his first start since July 18, when he was also pitching in a doubleheader.  He made only two relief appearances in the interim, pitching a total of three innings.

Don Wert was probably a better batter than it looks like, simply because he played during the 1960s.  A third baseman, he batted between .257 and .268 each year from 1963-1967 with an OPS close to .700 and around ten home runs a year.  In the 1960s offensive context, that's fairly good.  He finished tenth in MVP voting in 1965, when he batted .261/.341/.363 with twelve homers.  Oddly enough, he made his one all-star appearance in 1968, which was his worst year at bat--he batted .200/.258/.299 that year.  His first half numbers that year were better, but not a lot--.220/.279/.340.  He really did very little at the plate after the 1967 campaign, although he did continue to average double digit home runs.  He remained the Tigers starting third baseman through 1971, when he was traded to Washington in the kind of deal we never see any more--It was Wert, Elliot Maddox, Denny McLain, and Norm McRae to Washington for Ed Brinkman, Joe Coleman, Jim Hannan, and Aurelio Rodriguez.  He batted just forty times for the Senators, going 2-for-40, and was released in June, ending his playing career.  At last report, Don Wert was living in eastern Pennsylvania.

Record:  The Twins were 63-39, in first place in the American League West, leading Oakland by 3.5 games.