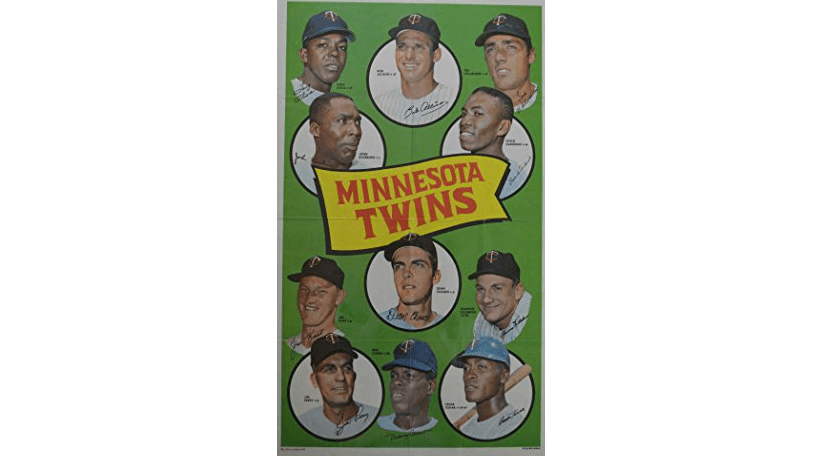 The game:  Uhlaender led off the game with a double and was on third with one out, but when Oliva hit what appeared to be a sacrifice fly he was called out on appeal for leaving third base too soon.  The Twins got on the board in the second, however.  Killebrew led off with a home run.  With one out, Cesar Tovar singled, stole second and third, and scored on a Johnny Roseboro single, putting the Twins in front 2-0.

Goossen led off the bottom of the second, cutting the lead to 2-1.  The Twins got the run back in the third.  Uhlaender walked, Rod Carew singled, and Graig Nettles delivered a two-out RBI double to make the score 3-1.

It stayed 3-1 until the seventh.  Jerry McNertney started the inning with a single and Valdespino hit a single-plus-error, putting men on second and third with none out.  Fred Stanley had a run scoring ground out followed by a Tommy Harper sacrifice fly, and that quickly the score was tied 3-3.

The Pilots started the eighth with singles by John Donaldson and Comer, but a double play took them out of the inning.  An error and a walk gave them two on with two out in the ninth, but Kennedy lined out to end the inning.  In the tenth, Steve Hovley advanced to third on a single and a stolen base-plus-error, but was stranded there.

Both teams missed chances in the twelfth.  Rick Dempsey led off the top of the inning with a double but remained on second.  Steve Whitaker started the bottom of the second with a single and was bunted to second, but got no farther.  Seattle had another chance in the thirteenth.  Goossen led off with a double.  An intentional walk and a force out left men on first and third with one down.  Stanley then hit back to the pitcher, who threw Goossen out at the plate.  A fly ball ended the inning.

The game finally ended in the fourteenth.  In the top of the inning Renick hit a one-out double but was thrown out trying to stretch it to a triple.  With two out in the bottom of the inning, Comer homered to end the game.

Notes:  I wonder if Rich Reese had a minor injury.  He hasn't played since September 24 and was not used in this game despite the fact that the Twins used nine substitutes, including Jim Kaat as a pinch-hitter.

The Twins started with their regular lineup.  In the third, Frank Quilici replaced Carew at second base.  Herman Hill pinch-hit for Perry in the fourth.  Tom Tischinski replaced Roseboro in the sixth.  Renick replaced Leo Cardenas at shortstop in the seventh.  Charlie Manuel replaced Tovar in the seventh but went to left, with Uhlaender moving to center.  Bob Allison pinch-ran for Tischinski in the tenth, with Rick Dempsey going in to catch.  In the eleventh, Cotton Nash replaced Killebrew at first base and Jim Holt went to right to replace Oliva.  Kaat pinch-hit for Joe Grzenda in the twelfth.

Darrell Brandon made the last of his three appearances as a Twin in this game.  He had made two in July.  He had started the season with Seattle, but was sold to the Twins on July 8.  b-r.com refers to him as "Bucky" Brandon--perhaps that was his nickname, but I don't remember him being called that when he played.  On the other hand, we didn't have the media coverage that we do now, so if Herb Carneal didn't use the nickname I probably wouldn't have heard about it.

Speaking of nicknames, I'd completely forgotten that Fred "Chicken" Stanley started his career as a Seattle Pilot.

The starting pitcher for Seattle was Claude "Skip" Lockwood.  He pitched seven innings, giving up three runs on seven hits and two walks and striking out two.

Record:  The Twins were 94-63, in first place in the American League West, leading Oakland by nine games.  They had clinched the division.