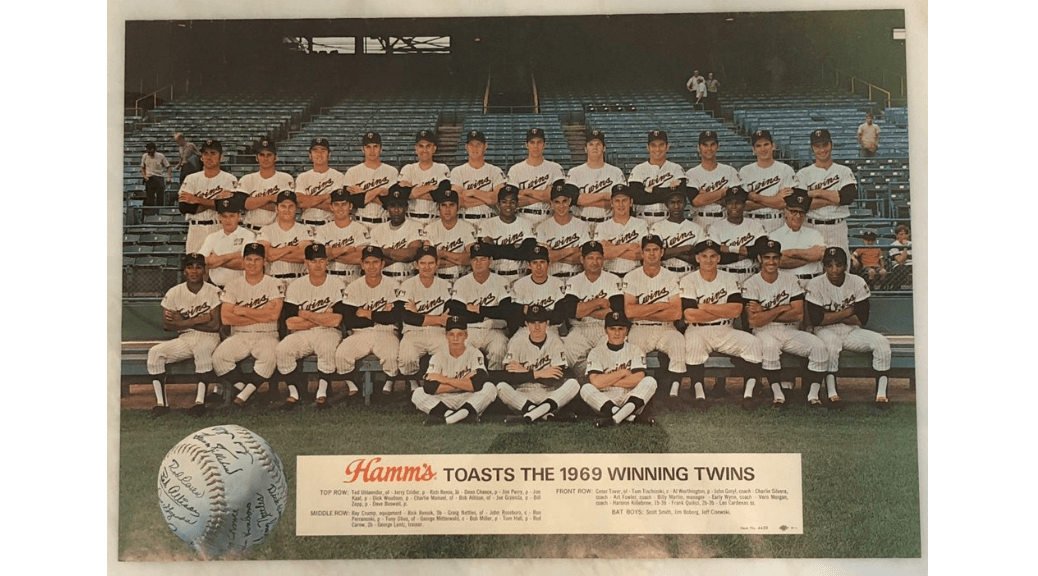 The game:  Carew hit a home run with one out in the first to give the Twins a 1-0 lead.  Killebrew followed with a double, but Tony Oliva and Graig Nettles struck out to end the inning.  In the second the Twins got singles from Leo Cardenas and Tom Tischinski with one out, but Miller hit into a double play.

The Pilots missed a huge chance in the second.  Singles by Mincher, Hovley, and Jim Pagliaroni loaded the bases with none out.  But ex-Twin Sandy Valdespino hit into a force out at the plate, and Fred Stanley and Baney were caught looking.  Seattle took the lead in the third, though.  With two out, Comer doubled and Mincher hit a home run to give the Pilots a 2-1 lead.

Seattle threatened again in the fourth, getting one-out singles from Valdespino and Stanley, but could do nothing with them.  The Twins meanwhile, could do nothing, period.  They did not get a man past first base in innings three through eight.  In the bottom of the eighth, Comer hit a one-out single, followed by back-to-back doubles by Mincher and Hovley, building the lead to 4-1.  That's where it was when the game ended.

Notes:  Reese remained out of the lineup, with Killebrew at first and Nettles at third.  Cotton Nash replaced Nettles in the fifth inning and went to first base, with Killebrew moving to third.  Cesar Tovar started the game in center but came out in the second inning.  He was replaced by Charlie Manuel, who went to left with Ted Uhlaender moving to center.  Tom Tischinski was behind the plate, with Johnny Roseboro on the bench.

This was the first win of Dick Baney's major league career and his only start of 1969.  In 18.2 innings he was 1-0, 3.86 at age 22.  He spent the next three seasons in AAA, not making it back to the majors until 1973 as a September call-up with the Cincinnati Reds.  He again did well, going 2-1, 2.93 in 30.1 innings.  He was with Cincinnati for about four months in 1974 and did not do well, going 1-0, 5.49 in 41 innings.  If you take out two really bad appearances, though, in which he gave up 11 runs in 1.2 innings, his ERA becomes 3.20.  Apparently no one wanted to look at it that way, though, and he never played in the majors again.  He did have a successful career after that, however, first working in his father's contracting business and then working as a real estate investor and property manager.