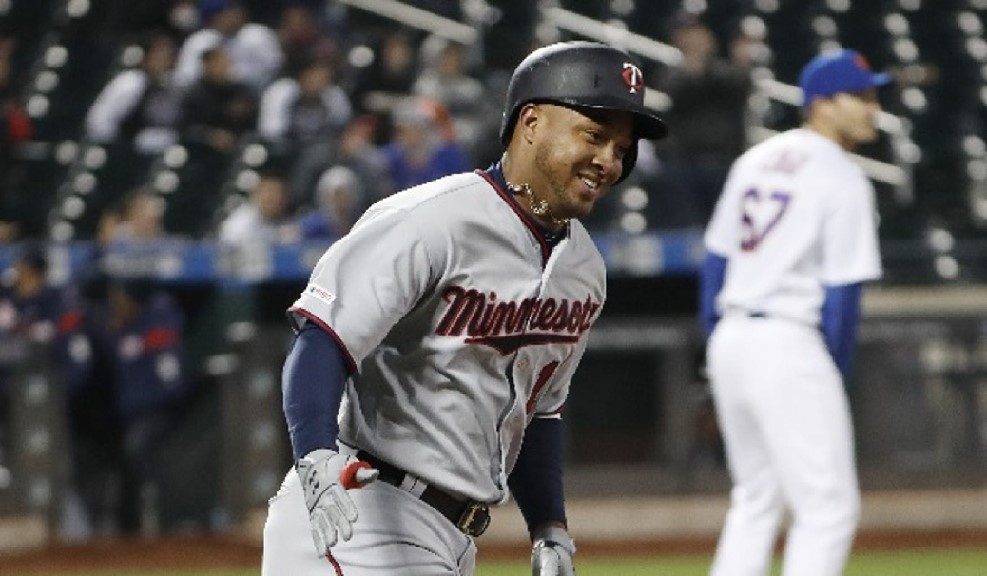 Pitching star:  Trevor May pitched a perfect inning and struck out one.  Trevor Hildenberger retired the only man he faced, which would not normally get him star mention, but it was a very big out.

The game:  Garver opened the second inning with a home run, giving the Twins a 1-0 lead.  It lasted until the bottom of the second, when Conforto doubled and scored on Rosario's double to tie it 1-1.  The Twins took the lead back with a four-run third.  Polanco tripled and scored on a wild pitch.  Willians Astudillo singled and Rosario and Garver hit back-to-back home runs to put the Twins up 5-1.  The Mets got two of the runs back in the bottom of the third, with home runs by Nimmo and Conforto cutting the margin to 5-3.

In the fourth, Buxton doubled and scored on a Max Kepler single to put the Twins up 6-3.  In the fifth, Nimmo led off with a double.  He was still on second with two out, but walks to Conforto and J. D. Davis loaded the bases.  Starter Kyle Gibson came out of the game, and Hildenberger came on to retire Jeff McNeil on a deep fly ball to keep the score 6-3.  Schoop homered in the sixth to increase the lead to 7-3.

Alonso homered in the seventh to make the score 7-4.  The Twins took control of the game in the eighth.  Buxton doubled and scored when Ehire Adrianza reached on an error.  Polanco then hit a two-run homer to make the score 10-4.  The Twins got some insurance in the ninth.  Rosario doubled, Garver singled, and Jason Castro hit a pinch-hit single.  Schoop followed with a three-run homer to make it 14-4.  The extra runs came in handy, as the Mets rallied for four in the bottom of the ninth.  Nimmo walked and Alonso hit a two-run homer.  A single, a walk, and another single loaded the bases with none out.  A walk to McNeil forced in a run and made the score 14-7, still with none out.  At that point, Chase De Jong pulled himself together and got a foul out, a force out, and a foul out to end the game.

Hildenberger, May, and Ryne Harper all have ERAs of zero.  Blake Parker has an ERA of 2.25.

Gibson pitched 4.2 innings, allowing three runs on six hits and three walks.  He did strike out six.  He was pulled one out shy of qualifying for a win, which shows that Rocco Baldelli is more concerned with team wins than pitcher wins.  It seems obvious that this is how it should be, but we can all think of Twins managers who did not seem to understand that point.

De Jong, of course, is the pitcher the Twins just had to have, couldn't get along without, was worth giving up Tyler Austin to have in the majors by Saturday.  This was the first time he's pitched, and quite frankly a position player probably could have done as well as he did.  It's not De Jong's fault that the Twins let Austin go, of course, and I have nothing against him.  I hope he gets another chance, and I hope he pitches well.  But it was still a really stupid thing for the Twins to do.

My guess would be that the number of people who expected the Twins to score fourteen runs in a game that Jacob de Grom started was approximately zero.

Record:  The Twins are 6-3, in second place in the American League Central, a half game behind Cleveland.