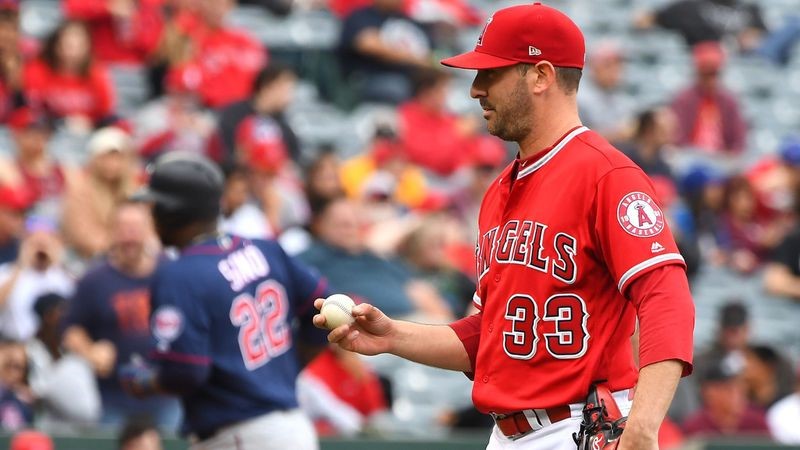 The game:  The Angels threatened in the first, putting men on second and third with one out, but a strikeout and a ground out ended the inning.  The Twins broke it open in the second.  Singles by Rosario and Cron were followed by a wild pitch, putting men on second and third.  A sacrifice fly brought home the first run, Sano walked, and Schoop hit a three-run homer to make it 4-0.  With two out, Kepler doubled and Polanco hit a two-run homer to make it 6-0.  In the third, homers by Cron and Sano increased the Twins' lead to 8-0.

Los Angeles made a comeback attempt in the bottom of the third.  Fletcher hit a one-out homer and Mike Trout followed with a double-plus-error.  He scored on a ground out to cut the lead to 8-2.  A pair of singles and a walk off of suddenly wobbly Twins starter Perez loaded the bases, but he came back to strike out Kole Calhoun to end the inning.  In the fifth the Angels got a pair of one-out walks and a two-out infield single, again loading the bases for Calhoun, but he hit into a force out to end the inning.

The Twins put it out of reach for good after that.  In the sixth Kepler drew a two-out walk, stole second, and scored on Polanco's double.  In the seventh, Cron hit a one-out double.  With two -out, Sano and Schoop hit back-to-back homers, Willians Astudillo walked, and Kepler homered, putting the Twins up 14-2.  Rosario homered in the eighth to make it 15-2.  In the ninth, Kepler singled, Ehire Adrianza walked, and Rosario had an RBI single to make it 16-2.

Los Angeles did get some runs in the ninth to make the score look better.  Goodwin led off with a home run.  Walks to Trout, Dustin Garneau, and Jonathan Lucroy loaded the bases and La Stella hit a grand slam to cut the margin to 16-7.  A two-out single by La Stella chased Austin Adams from the game, and Mike Morin retired Zack Cozart on a ground ball to end the contest.

Notes:  Kepler was in center and Marwin Gonzalez in right, with Byron Buxton on the bench.  Luis Arraez was the DH.  Willians Astudillo caught and batted ninth, taking Buxton's place as the second leadoff man.

Perez has been substantially less awesome in his last three starts.  He has pitched 16.2 innings and allowed six runs, which isn't bad, but he's also allowed fifteen hits and ten walks.  He obviously wasn't going to keep it going as well as he had, but the walks, especially, are not a good trend.

Nothing personal, but if Austin Adams can't protect a fourteen-run lead for one inning he really doesn't have a place on a major league baseball team.  You might as well have an extra position player.

I feel like I should be saying more about all the home runs, but I don't really know what to say about except that it's fun to see.  It was nice of them to do it in a day game while I was on the road, so I could enjoy all the homers live.

Even more notable than the eight home runs might be the fact that Astudillo drew a walk.

freealonzo linked an interesting article about Rocco in yesterday's game log.  I don't know about all the generational stuff, but I have noticed how much more complimentary Rocco is about his players compared to recent Twins managers.  It's easier to do that when you're winning, of course, but it was already clear in spring training.  Rather than looking for things to criticize or cautioning us against getting too excited when a player is doing well, Rocco actually praises them.  It seems like that would have to create a more positive environment in the clubhouse.

I also think the Twins have not received enough credit for the coaching staff they put together.  It's hard to know, from the outside, how much credit/blame to give coaches--we can see the results, but we don't know how much of it is due to the coaches versus the players themselves.  But the Twins have a substantial number of players who are doing better this year than last year, and some who are doing better than they ever have before.  It seems to me that's a pretty good indication that the coaching staff knows a thing or two.

The caution about all this, of course, is that we're still not quite a third of the way into the season.  We've all seen teams that looked like world-beaters in May but fell apart in August and September.  I don't think that's going to happen with this team, though.  That's not to say they'll win over two-thirds of their games all season.  In fact, they'll probably have a down stretch at some point--almost everyone does--and then all the so-called "fans" who delight in running their team down will be out in full force.  But unless they get a string of injuries, I don't see this team collapsing.  This is a good baseball team.

Record:  The Twins are 33-16, first in the American League Central, eight games ahead of Cleveland.