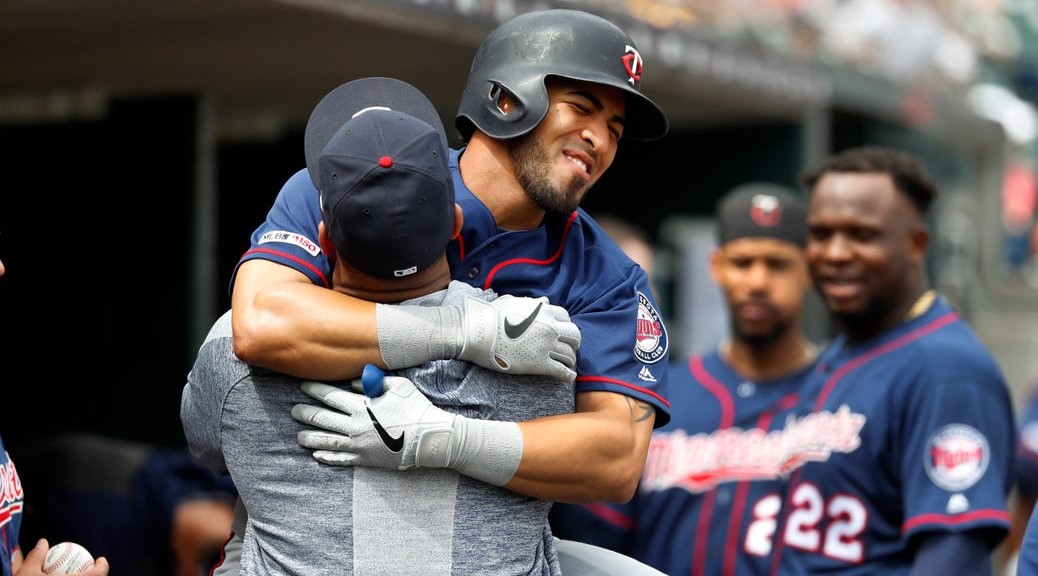 Opposition stars:  John Hicks was 2-for-4 with a double.  Christin Stewart was 2-for-4.

The game:  The Twins scored three in the first inning, as Jorge Polanco led off with a single, Mitch Garver had an RBI double, and Cruz hit a two-run homer.  It looked like the Tigers might get the runs right back in the bottom of the first, as Niko Goodrum walked and Stewart singled him to third, but Nicholas Castellanos hit into a double play and the damage was limited to one run, leaving the Twins up 3-1.

The Twins put the game out of reach in the fourth.  Sano led off with a home run.  Adrianza and Buxton singled and Polanco hit a sacrifice fly, making it 5-1.  Garver walked, and with two out Rosario had an RBI single and Cron hit a two-run double, putting the Twins up 8-1.

The Twins tacked on a few more.  Cruz singled home a run in the fifth, Buxton hit a two-run homer in the sixth, and Rosario homered in the seventh.  Odorizzi remained in control for six innings.  Detroit got a run off Mike Morin in the seventh but did not threaten to get back into the game.

Notes:  Adrianza was at second base, replacing Jonathan Schoop.

It was nice to see the boys break out like this after a rather lackluster performance Saturday.  It's been a long road trip, and it's a long season, and games like Saturday have to be expected once in a while.  But it was nice to see that it didn't continue into the next day.

Odorizzi remains on a roll.  At this time last year, he was 3-3, 4.24.  His lowest ERA in a season is 3.35, which was with Tampa Bay in 2015.  His career ERA going into this season was 3.95.  None of those numbers are terrible, but he'd been pretty much an average pitcher coming into this season, and now he's pitching like a Hall of Famer.  The odds are against him doing it all season, of course.  We can hope, however, that he has discovered something which will permanently make him a better pitcher than he was prior to this season.  Not necessarily a Hall of Fame-level pitcher, but a very good pitcher.  So far, he and Jose Berrios have been a very effective one-two punch, and are a big reason why the Twins have yet to lose more than two consecutive games.

Record:  The Twins are 43-21, first in the American League Central, 10.5 games ahead of Cleveland.