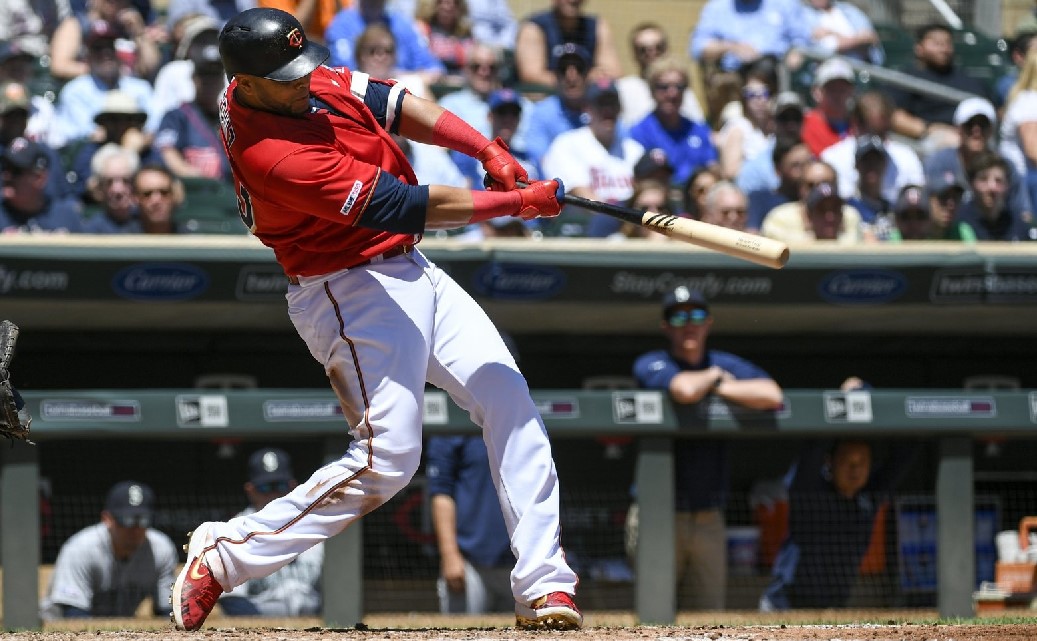 Opposition stars:  Yusei Kikuchi pitched five innings, giving up one run on six hits and two walks and striking out four.  Daniel Vogelbach was 2-for-4 with a walk.  Kyle Seager was 2-for-5 with a double.  Dylan Moore was 1-for-1 with a double, a walk, and two RBIs.

The game:  The  Twins loaded the bases with none out in the second and did not score.  At the time it was a big missed opportunity, although it turned out not to matter.  Cruz homered with one out in the third to give the Twins a 1-0 lead.  It stayed 1-0 through five.  In the sixth, Vogelbach had an RBI single to tie it 1-1.

It didn't stay tied long.  The Twins exploded for six runs in the bottom of the sixth to take control of the game.  Max Kepler walked, Adrianza singled, and a pickoff error gave the Twins the lead.  A wild pitch and a fielder's choice made it 3-1.  Byron Buxton walked and Polanco singled, again loading the bases.  With one out, Cruz delivered a two-run single.  With two out, Schoop walked and Kepler came through with a two-out single.  The Twins scored six runs without hitting a homer and led 7-1.

They would add three more in the seventh on a Polanco RBI single and Cron's two-run homer to go ahead 10-1.  The Mariners scored two in the eighth and two in the ninth off the back of the Twins bullpen to make the final score look better.

Notes:  Gonzalez was in left field in place of Eddie Rosario.  Adrianza was at third base in place of Miguel Sano.  Cron batted second in the order, with Gonzalez batting fourth.

With all the runs, we should not forget the good game pitched by Pineda.  Oddly, he had gone six starts in a row giving up exactly three earned runs, which seems like it might be a record of some kind.  Yesterday, however, he gave up just one in 5.2 innings.  Ideally, he'd have been able to at least complete the sixth, but you don't expect "ideal" from the back end of the rotation.  If he could do this every time, you'd take it and be very happy.

The Twins scored six in the sixth without hitting a home run.  My guess is that this may be the biggest inning they've had all year without a homer.  The home runs are fun, and I'm all for them, but it's also good to be able to score runs in other ways.  The more ways you have to score, the more you're likely to score.

Fernando Romero, the latest "fresh arm for the bullpen", faced four batters yesterday and retired exactly none of them.  This was the entirely foreseeable result of bringing a man to the majors who has done nothing to show that he belongs there, simply because the letter "P" appears next to his name on the roster sheet.  I'm not a big fan of carrying thirteen pitchers, but I would complain less about it if the thirteenth pitcher could actually pitch.  If the thirteenth pitcher is of the Chase De Jong/Andrew Vasquez/Austin Adams variety--someone you can't even trust to fill an inning of a blowout--then he's worthless.  You might as well have the extra position player, someone who might actually be able to contribute something.

And to be honest, the twelfth pitcher, Matt Magill, hasn't gotten much accomplished lately, either.  He did well Tuesday night, but in his last five appearances he has pitched 4.2 innings and allowed twelve runs (eleven earned) on twelve hits and five walks.

I'm sure the front office is aware of the problem--it would be hard for them not to be.  And I'm sure they're working on it.  One of the nice things about having an eleven game lead in the division is that they don't have to feel like they have to make a move right now.  They can wait and try to get the player(s) they want on favorable terms.  Whether they'll actually be able to do that is another question, but the point is that there's no reason to panic and make a move just to make a move.  It's much better to wait and make a good move than to do something now just so they can say they did something.

Record:  The Twins are 45-22, first in the American League Central, eleven games ahead of Cleveland.