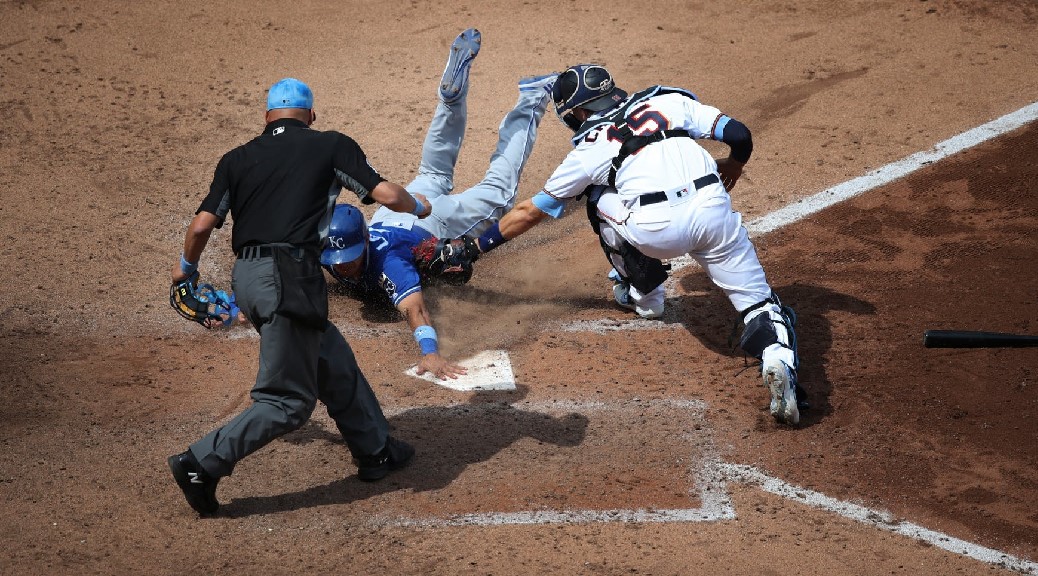 Pitching star:  Matt Magill pitched a scoreless inning, giving up a walk and striking out one.

Opposition stars:  Martin Maldonado was 3-for-4 with a double, scoring twice and driving in two.  Jorge Bonifacio was 2-for-5 with a double and two RBIs.

The game:  The Twins got a pair of runners on in the bottom of the first but did not score.  This would be a theme.  In the second, the Royals put together a walk and four singles to score three runs and take a 3-0 lead.

Martin Perez settled down after that, and the Twins got back in the game with two in the fourth.  Sano led off with a home run, Marwin Gonzalez was hit by a pitch, and singles by Schoop and Kepler cut the lead to 3-2.  Polanco was intentionally walked to load the bases with two out, but Nelson Cruz struck out to strand the runners.

In the seventh, two singles, a bunt, and an error plated to Kansas City runs to make it 5-2.  Cruz homered in the bottom of the seventh to make it 5-3.  Three singles loaded the bases with one out, but Schoop struck out and Mitch Garver flied out to strand the runners.  The Royals extended their lead in the eighth on an error, RBI doubles by Bonifacio and Maldonado, and a run-scoring single by Billy Hamilton.  It was 8-3 and it looked like the game was gone.

To the Twins' credit, they came back to make a game of it.  In the bottom of the eighth, a walk to Ehire Adrianza and singles by Kepler and Polanco again loaded the bases, this time with none out.  Cruz doubled home two to make it 8-5, but the Twins could do no more.  In the ninth, Schoop singled, Kepler had an RBI double, and Polanco walked to bring the winning run to the plate, but Cruz struck out to end the game.

Notes:  Gonzalez was in right field, with Kepler in center and Byron Buxton still resting a bruised wrist.  Adrianza was at first base with C. J. Cron on the bench.

The Twins stranded fifteen men and went 4-for-18 with men in scoring position.  The good news is that they had fifteen hits, five walks, and a hit batsman, giving them twenty-one baserunners.  It was a frustrating game, no question, but it happens once in a while.  If they keep getting twenty-one baserunners a game, I think they'll be okay.

All the runs against Morin were unearned, but you can't argue that he pitched well.  After the error, which put a man on first with one out, there was an RBI double, a fly out, another RBI double, a run-scoring single, and a walk before the third out was recorded.  It seemed odd that Morin remained in the game that long.  I wonder if Rocco thought the game was gone at that point and didn't want to burn another reliever.  That's mere speculation on my part, but it's hard to think Morin would've pitched that long if the manager thought the game was on the line.

In regard to the game-ending checked swing, I really thought that was a call that could've gone either way, and it didn't go the Twins' way.  But Cruz had stood there and watched two good strikes, then started to swing at a pitch well out of the strike zone.  I don't think he or the Twins have much complaint coming on that.

On the one hand, it was a frustrating game to lose.  On the other hand, I didn't think the Twins played all that well in the whole series.  Maybe it was the hubbub over Joe Mauer weekend, maybe they're getting a little bit tired, maybe they just find it hard to get up for a series against Kansas City.  It just seemed to me that the team was a little bit off all weekend, and they were fortunate to win two out of three.  But maybe that's the mark of a good team, too--to be able to win even when you're a little bit off.

Record:  The Twins are 47-23, first in the American League Central, ten games ahead of Cleveland.