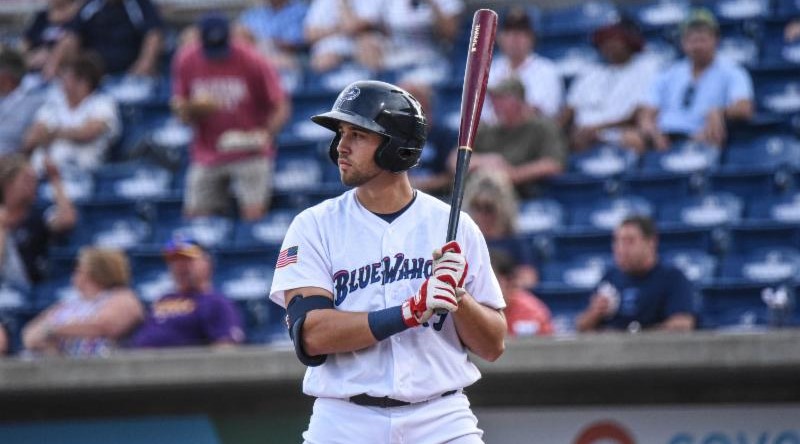 Trevor Larncah, Alex Kirilloff, and Royce Lewis led the Blue Wahoos.  Yeltsin Encarnacion had a big homer for the Miracle.

The Blue Wahoos scored four in the first and five in the sixth to take a 9-2 lead, then held on.  Trevor Larnach was 3-for-4.  Alex Kirilloff was 3-for-5 with a home run (his eighth), two runs, and two RBIs.  Jimmy Kerrigan was 2-for-5 with two runs.  Royce Lewis was 2-for-5.  Bryan Sammons pitched six innings, giving up two runs on six hits and two walks and striking out three.  Brusdar Graterol pitched 1.1 scoreless innings, giving up two walks.  His ERA is 1.78.  The Blue Wahoos are 26-24, in third place, six games back.

Yeltsin Encarnacion homered in the seventh to break a 1-1 tie.  Jacob Pearson was 3-for-4 with a home run.  Encarnacion was 1-for-3 with a home run.  Tyler Watson struck out six in six innings, giving up one run on six hits and two walks.  Johan Quezada pitched 1.1 scoreless innings, giving up a hit and a walk and striking out one.  Moises Gomez retired all five men he faced, four of them by strikeout.  The Miracle is 28-26, in fourth place, 10.5 games back.

The Kernels tied it with a sacrifice fly in the top of the ninth, but Yeison Coca's infield single in the bottom of the ninth won it for the Timber Rattlers.  Daniel Ozoria was 2-for-2.  Jose Martinez struck out two in 1.1 scoreless innings, giving up two hits.  Dylan Thomas pitched two shutout innings, giving up a hit and striking out one.  The Kernels are 29-22, in third place, five games back.

The Angels scored twice in the fifth on bases-loaded walks to break a 2-2 tie.  Rubel Cespedes was 2-for-4 with a triple.  Luis Baez was 2-for-4 with a walk.  He is batting .319.  Misael Urbina was 2-for-5 with a triple.  Luciano De La Cruz pitched 2.1 scoreless innings, giving up two hits and striking out two.  Moises Causado struck out two in a perfect inning.  The Twins are 20-36, in eighth place, 18.5 games back.