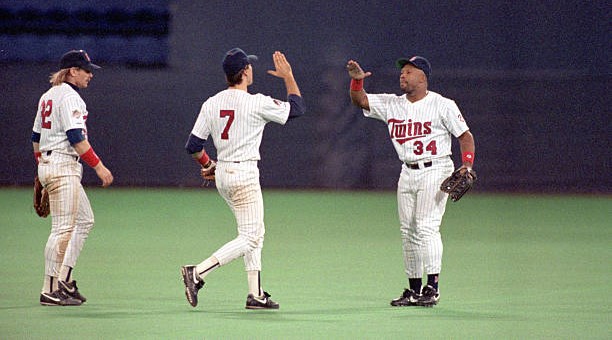 Batting stars:  Chuck Knoblauch was 3-for-3 with a triple, a double, a walk, and a stolen base (his twelfth).  Dan Gladden was 2-for-5 with a three-run homer (his fifth) and two runs.

Pitching star:  Paul Abbott pitched four innings of relief, giving up two runs on five hits and a walk and striking out three.  Carl Willis retired all four batters he faced, striking out one.

The game:  The Twins scored two in the first inning.  Gladden singled and Knoblauch followed with a double.  A pair of productive out made the score 2-0.  Sveum hit a home run in the second to cut the lead to 2-1.  In the fourth the Brewers got two singles, a bunt, and a sacrifice fly to tie the score 2-2.

The Twins took the lead back in the bottom of the fourth.  Kent Hrbek walked, and Chili Davis and Brian Harper each singled, loading the bases with none out.  A fielder's choice/error scored one run and a force out scored another, and the Twins led 4-2.

It stayed 4-2 until the eighth.  Abbott had pitched three scoreless innings, but he gave up a leadoff single to Bichette followed by Maldonado's two-run homer, and the score was tied 4-4.

No problem.  Milwaukee starter Bill Wegman was still in the game to start the ninth.  He retired Mike Pagliarulo on a grounder, but gave up singles to Shane Mack and Randy Bush.  Now approaching one hundred twenty pitches, he remained in the game to face Gladden.  It was a mistake, as Gladden hit a walkoff three-run homer down the left field line.

Notes:  This is the first time in a long time where the Twins completely used what one would call their standard lineup.  No one injured, no one being rested.  Bush pinch-hit for Greg Gagne in the ninth and Al Newman pinch-ran for Bush.

It seems really strange that Tom Trebelhorn left Wegman in to pitch a complete game.  It's true that he hadn't given up a run since the fourth, but he wasn't exactly blowing people away, either.  He'd given up a hit in each of the last three innings.  He didn't have a low pitch count--he ended at one hundred twenty-two pitches.  He was their best starter that year, and apart from Doug Henry their bullpen was nothing to brag about.  Still, it was well-rested, and if you're not going to use them then there's no point in having them.

Gladden was 5-for-15 with two doubles and a home run since his return.

The Twins had won three in a row and seven out of nine.  The White Sox won, so the Twins neither gained nor lost ground.

Record:  The Twins were 58-40, in first place in the American League West, four games ahead of Chicago.

One thought on “1991 Rewind: Game Ninety-eight”