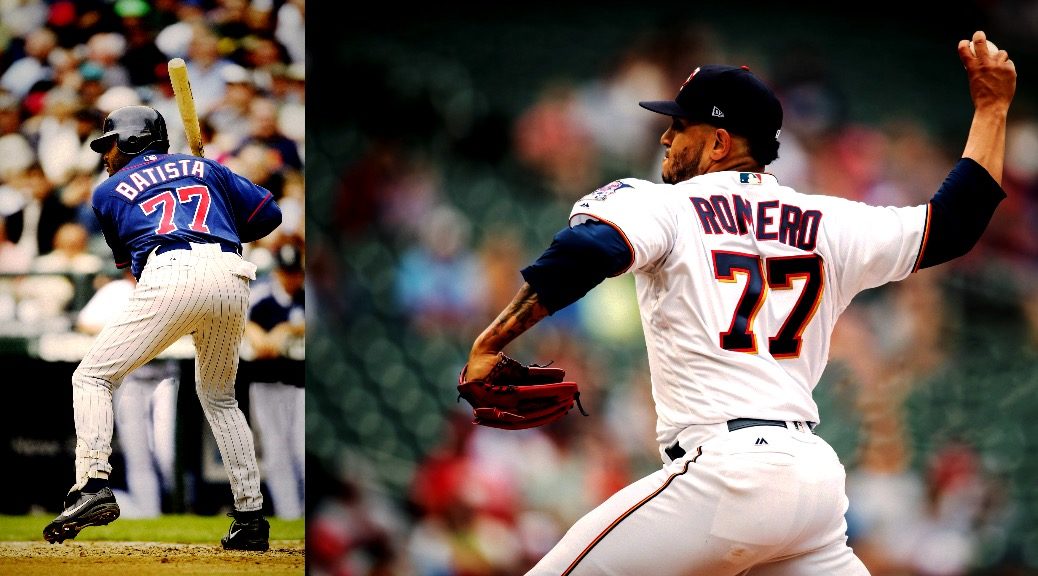 Tony Batista played for the Twins fourteen years ago, which isn't long enough in the past to erase the memories. He was signed as a free agent after being released by the Fukuoka Daiei Hawks, for whom he hit .263/.294/.463 in 591 PA in 2005. This was a period of maddening, self-thwarting, dumpster diving free agent signings that kept the Twins from capitalizing on the core of excellent players the organization had developed. (Also on the 2006 Twins: Ruben Sierra, Phil Nevin, Juan Castro, and RonDL White.) Who knows what Terry Ryan was told by scouts, but I'm guessing it led with "27 homers and 90 RBI." Batista, who wore Nº 7 in Ontario and Quebec, was definitely not getting that number in Baja Manitoba Minnesota. Nor was he getting the Nº 10 he wore in Arizona and Baltimore. Instead, Batista leapfrogged Joe Roa to claim the highest regular season jersey number issued by the Twins to that point.

Batista played exactly 50 games, all of them starts at third base, where he gave statues a bad name with -8 Runs Fielding in 434 innings. (Those interested in more traditional stats will observe the .954 fielding percentage and as many errors (6) as double plays turned (also 6).)

Batista was cut on 15 June. Somehow, the Twins survived Batista's performance and won the AL Central, finishing one game ahead of the Detroit Tigers. Jason Bartlett was called up to take his place on the active roster; Bartlett finished the season with 2.8 rWAR, good for 8th on the team.

No highlights survive of Tony Batista's time with the Twins because there were none to begin with.

Fernando Romero will be 25 this season, and is at a crossroads in his time with the Twins. Romero has stuff — Fangraphs rates his 95–97 mph fastball as a 70/70 — but walks have been a problem in his limited time in Minnesota. Romero has a 1.565 WHIP in 69.2 innings for the Twins, which a strikeout rate just a bit below 20% won't mitigate. He's been better than league average at keeping the ball in the park (SSS). A guy who throws hard and has an okay slider might find a spot in the bullpen, but the Twins aren't flush in fungible bullpen slots when they have guys who throw just as hard, and with better control and, thus far, results. Romero is out of options, so if he doesn't break camp with the Twins, he'll likely be wearing a different uniform the next time he reaches the majors.

Who claims ownership of jersey № 77?