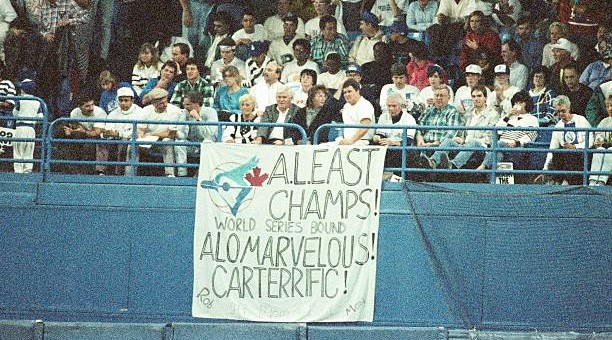 Opposition stars:  Jimmy Key pitched six innings, giving up two runs on five hits and a walk and striking out one.  Joe Carter was 1-for-3 with a walk.

The game:  With two out in the first inning Carter homered to get the Blue Jays on the board.  They weren't done, as John Olerud walked, Kelly Gruber singled, and Candy Maldonado delivered an RBI double, giving Toronto a 2-0 lead.

The Twins did not get a hit until the fourth, when Puckett hit a double.  Nothing came of it, and nothing came of the Blue Jays' fourth, when they opened the inning with a pair of walks.  The Twins got on the board in the fifth, when Shane Mack tripled and scored on a ground ball.

In Toronto's fifth, two more walks and a wild pitch put men on second and third, but again nothing came of it.  The Twins tied it in the sixth when Knoblauch hit a one-out double and Puckett drove him in with a single.  The Blue Jays threatened again in the seventh when Devon White singled, was bunted to second, and Carter was intentionally walked, but again they did not score.  There were no further threats through nine, so we went to extra innings.

Well, only one extra inning.  With one out in the tenth, Pagliarulo pinch-hit for Scott Leius and hit a 1-0 pitch over the fence to give the Twins their first lead at 3-2.  Aguilera came on and retired Toronto in order in the bottom of the tenth to give the Twins a victory.

Notes:  Scott Erickson was the starting pitcher, so Junior Ortiz was behind the plate.  Paul Sorrento pinch-hit for Greg Gagne in the ninth.  Al Newman came in to play shortstop.  Gene Larkin pinch-hit for Ortiz in the tenth.  Brian Harper came in to catch.  As stated above, Pagliarulo pinch-hit for Leius in the tenth and stayed in the game at third base.

Erickson pitched four innings, giving up two runs on three hits and five walks and striking out two.  He came out in the fifth after giving up a leadoff walk to Roberto Alomar.  It was a quick hook, in a way, but five walks (and three in the last inning-plus) will tend to make a manager do that.  The Twins bullpen came through in a big way, pitched six scoreless innings.  In addition to the pitchers listed under "pitching stars", Guthrie came in to retire the only man he faced, Rob Ducey.

Toronto stranded ten men and went 1-for-9 with men in scoring position.  The Twins were not a lot better, stranding six and going 1-for-7 with men in scoring position.  The Blue Jays drew eight walks, but could get only five hits.  It had to be a tough loss for Toronto--their first home game of the series, they had all kinds of chances to win, and yet they could not do it.