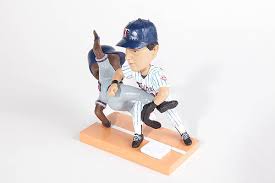 We talked about this a lot just last week.  I'm just grateful it happened before instant replay.  Not because of it could have been overturned.  It just would have been nauseating sitting through it.

On May 19, 2008, the Twins were a game out of first place in a very crowded AL Central.  In a back-and-forth game against the Rangers, the Twins tied in the 9th thanks to a Joe Mauer single.  However, due to Mike Redmond pinch-hitting for Adam Everett (my word) and  Craig Monroe pinch-hitting for Alexi Casilla (oh man), Gardy lost the DH after the 9th inning (at least Monroe walked and scored the tying run!).  Howie Clark filled in at second base and DH Brendan Harris went to short.

Korecky relieved Juan Rincon in the 11th and helped him escape a bases loaded jam with one out.  And then in the bottom half he promptly banged a single to right.  In fact, he was on 3rd base as the winning run with just one out when Morneau and Cuddyer were shut down (as they had been all game).

No worries, though.  Korecky pitched a 1-2-3 ninth against Josh Hamilton, Milton Bradley, and David Murphy.  And then in the bottom half, Carlos Gomez (who had started on the bench due to an injury) singled and scored on Howie Clark's final hit of his career.