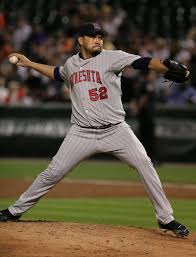 4. Span Triples Down the Line

In 2008, with six games left in the season, the Twins were behind the White Sox by two and a half games. Fortunately, their last six games were at home, with three against the Sox. They won the first two games of the series to keep their season alive, and one more win against the Sox would put them in first place.

The Sox staked themselves to an early 6-1 lead, which took the wind out of the sails of most Twins fans watching. But they slowly crept back, and were down 6-4 entering the bottom of the 8th. Brendan Harris double to start the frame, and with one out, Carlos Gomez singled to bring the game within one. Up next was Denard Span, and Dick Bremer came through with the call of his career.

On May 20, 2005, Silva struck out three batters in a nine-inning game and still got twenty-seven outs while allowing only five baserunners.  It was a magic trick that not even the magician could explain.  The Twins beat the Brewers 5-1 and Silva was barely warmed up after tossing 74 pitches.