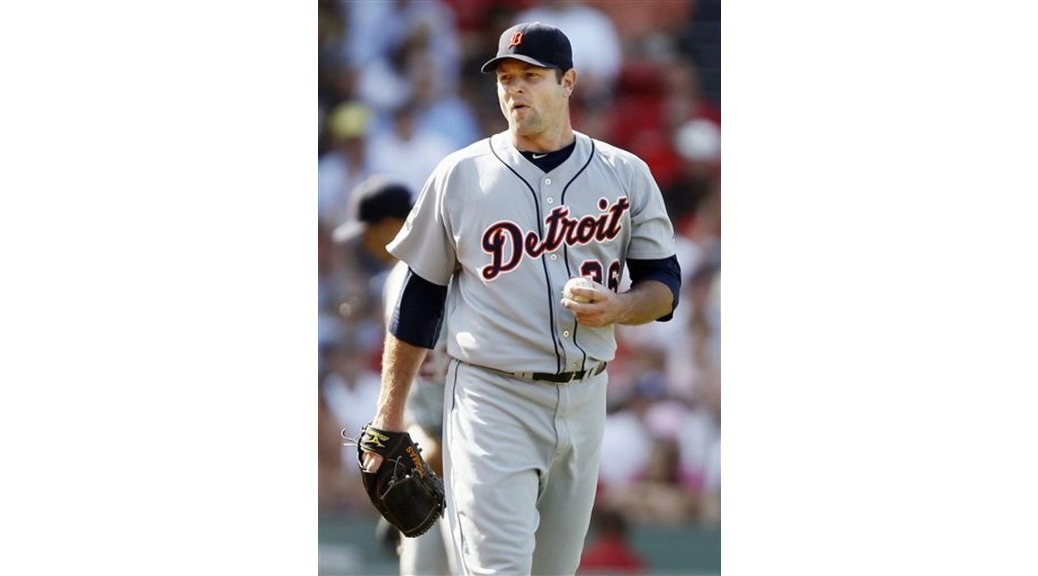 Pitching star:  Jesse Crain struck out two in a scoreless inning, giving up a hit and a walk.

The game:  The Tigers jumped out early, scoring four runs in the first before a man was retired and never trailing after that.  Jackson was hit by a pitch.  Singles by Santiago and Ryan Raburn loaded the bases, and Cabrera and Brandon Boesch each hit a two-run double, giving Detroit a 4-0 lead.

The Twins started getting back into it in the fourth.  Michael Cuddyer led off with a single, Thome tripled, and Young singled, cutting the lead to 5-3.  In the sixth Thome homered, narrowing the margin to 5-4.

But that was as good as it got for the Twins.  Laird homered in the eighth to make it 7-5.  The Twins went down in order in both the eighth and the ninth and went down to defeat.

Notes:  Justin Morneau was at first base.  As you probably recall, he was having an awesome year until he was injured in early July, bringing his season to a premature end and affecting his entire career.  Cuddyer actually played the most games at first base that season, 84 to 77.

Thome led the team with 25 home runs.  Kubel and Young were tied for second with 21.  Others in double figures were Morneau (18) and Cuddyer (14).  The Twins were ninth in home runs with 142.  Toronto led the league with 257, which was 46 more than the second place team (Boston).

Detroit used two pitchers with connections to the Twins, Brad Thomas and Joel Zumaya.  Thomas was in his second act in MLB.  He had last pitched in the majors with the Twins in 2004.  He then went to Japan and to Korea before making it back to the big leagues with Detroit in 2010.  He made the most of the opportunity, going 6-2, 3.89 in 49 apperaances (69.1) innings.  It was the only good year he would have.  He kept pitching, though, going to his native Australia and to Taiwan before ending his playing career in 2014.  He has going back to Australia and appears to have a number of successful business interests there, some related to baseball and some not.

This was the middle of a three-game losing streak for the Twins.  They were in a stretch where they would win just two of eight.  This game was a battle for first place in the division at the time, as you'll see below.

Record:  The Twins were 41-35, in second place in the American League Central, a half game behind Detroit.  They would finish 94-68, in first place, six games ahead of Chicago.

The Tigers were 41-34, in first place in the American League Central, a half game ahead of Minnesota.  They would finish 81-81, in third place, 13 games behind Minnesota.

Rewind Record:  The Twins are 39-38 in Random Rewind games.