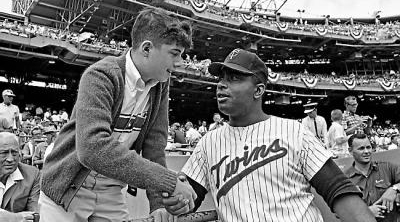 Batting stars:  Earl Battey was 2-for-4 with a home run (his seventeenth) and two runs.  Joe Altobelli was 2-for-5.  Harmon Killebrew was 1-for-2 with a three-run homer (his forty-third), three walks, and two runs.

The game:  Each team put two men on in the first, but neither scored.  In the third Lenny Green singled with one out, Billy Martin walked, and Killebrew hit a three-run homer.  Battey homered later in the inning to make the score 4-0 Twins.

The Athletics drew a pair of one-out walks in the fourth, but a line drive double play took them out of the inning.  It was still 4-0 until the eighth.  Altobelli led off the inning with a single.  Battey reached on an error, and Bob Allison bunted the runners to second and third.  A wild pitch scored a run, Bill Tuttle walked, and Zoilo Versalles got a bunt single to make the score 6-0.

The Twins added one more in the ninth when Killebrew walked, Battey singled, and Allison had an RBI single.  Kansas City put two men on in the ninth but could not break the shutout.

Notes:  Altobelli was in left field in place of Jim Lemon.  He had come up from the minors in early August.  This was his last season in the majors, but he would continue to play in the minors for several more years.  In 1966-1967 and in 1970 he was a player-manager in the minors, although he did not play very often.

The Bill Kunkel who started and lost for Kansas City is the same Bill Kunkel who was a major league umpire from 1968-1984.  He is the last person to have been both a major league player and a major league umpire.  He was a Rule 5 pick for the Yankees in 1963 and had a good year for them, pitching in 22 games and going 3-2, 2.72, 1.19 WHIP.  It looks like he mostly pitched mopup relief, but still, that's pretty good.  For some reason, though, he never got another chance in the majors.  Instead, he was in AAA for Milwaukee in 1964 and in AAA for Baltimore and Detroit in 1965.  He obviously had a much longer career as an umpire.  He retired in August of 1984 when his son, Jeff, reached the major leagues.  Sadly, he did not get much time to enjoy his retirement.  The cancer he had been fighting for years came back even stronger, and he passed away on May 4, 1985.

The Athletics used Joe Nuxhall as a pinch-hitter in the seventh.  Yes, that's the Joe Nuxhall who pitched for many years for Cincinnati and other teams.  As you probably know, he's the youngest player ever to appear in a major league game, pitching an inning in 1944 at age fifteen.  He would not reappear in the majors for eight years, but he went on to have a fine career.  He was, as they say, a good hitter for a pitcher, batting .198/.240/.292 in 861 plate appearances.  He was a good hitter, period, in 1961.  Small sample size, obviously, but he batted .292/.352/.446 with 2 home runs in 76 plate appearances.  Still, it's hard to understand using him as a pinch-hitter.  Kansas City had only used two substitutes, so they surely had position players remaining, especially in a September game.  Apparently, though, this was not unusual--it appears that he was used as a pinch-hitter 26 times in 1961, batting .250/.423/.300 in those appearances.

Random Record:  The Twins are 47-46 in Random Rewind games.