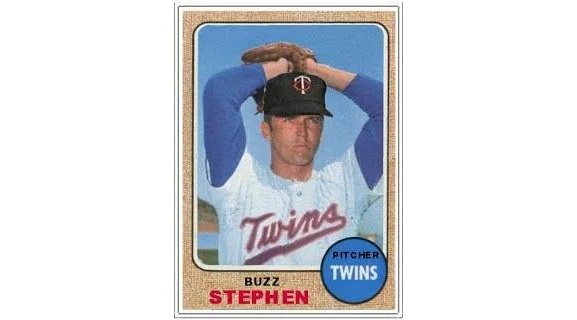 The game:  Bert Campaneris led off the game with a single and stole second.  Jackson walked, and the two pulled off a double steal, putting men on second and third with none out.  A ground out and a sacrifice fly gave the Athletics a 2-0 lead.

The Twins loaded the bases with two out in the first but did not score.  Roseboro homered leading off the second, however, cutting the lead in half at 2-1.  In the fourth Green singled, stole second, and scored on a Joe Keough single to put Oakland's lead back up to two at 3-1.

The Twins put men on second and third with one out in the fourth but did not score.  It stayed 3-1 until the seventh, when the Athletics put it out of reach.  Campaneris drew a one-out walk and went to second on a pickoff error.  Jackson's RBI single made it 4-1.  Back-to-back errors on shortstop Jackie Hernandez increased the lead to 5-1 with a man on second.  Green delivered a two-out RBI single to make it 6-1.

Cater homered in the ninth to round out the scoring.  The Twins did put men on first and second with none out in the bottom of the ninth, but again, nothing came of it.

Notes:  Bob Allison was at first base, with Killebrew manning third.  They each played those positions a fair amount in their careers, but not in 1968--Allison had only 17 games at first and Killebrew had just 11 at third.  I don't know why Cal Ermer chose to go with that arrangement here.

Rick Renick started the game at shortstop and was replaced by Hernandez at the start of the second inning.  Renick did not bat in the bottom of the first.  There was one ball hit to shortstop in the first--Renick made the play, but possibly injured himself somehow.  Or, perhaps he wasn't feeling well, tried to go, and just couldn't.  I don't know.

With Allison at first base, September call-up Graig Nettles was in left field.  Nettles began his professional career as a second baseman, then moved to third, but in the majors with the Twins he played more outfield than anything.  He eventually made himself into a fine defensive third baseman, but my understanding is that he was not good on defense early in his career, which is why he was put in the outfield.

With Killebrew at third, Cesar Tovar was put in center field, with Ted Uhlaender moved to the bench.  Pat Kelly was in right field in place of Tony Oliva, who missed the last month of the season.

It was a September game, and the Twins used most of the expanded roster.  Bruce Look pinch-hit for Hernandez in the seventh, Uhlaender then pinch-ran for Look, and Ron Clark came in to play shortstop.  Jim Holt pinch-hit for Kelly and stayed in the game in right field.  Jim Kaat pinch-ran for Killebrew in the eighth, with Frank Quilici going in to play third.  The Twins also used Rich Reese and Rich Rollins as pinch-hitters for pitchers.

Stephen actually pitched fairly well for six innings, but his final line was 6.1 innings, five runs (four earned), eight hits, and five walks with one strikeout.  It was his major league debut.  Five days later would be his major league swan song, as he appeared in just two big league games.  In the latter game he pitched five innings, giving up two runs on three hits and two walks and struck out three in getting the win.

The Twins stranded nine runners and were 0-for-9 with men in scoring position.

As far as the Twins' team batting and pitching stats in 1968, we've been through that a couple of times already and I really don't have anything to add.

This was one of only four losses the Twins had in their final fourteen games of 1968.

Random Record:  The Twins are 55-51 in Random Rewind games.