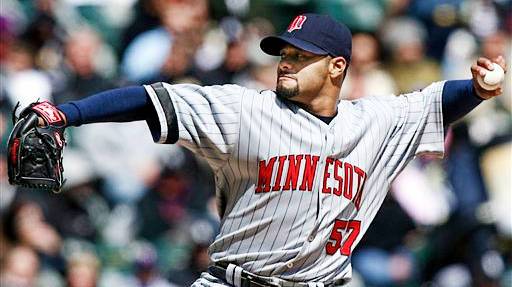 Pitching stars:  Johan Santana struck out ten in eight innings, giving up two runs on eight hits and a walk.  He threw 100 pitches.  Grant Balfour struck out two in a perfect inning.

Opposition star:  Casey Blake was 4-for-4 with a two-run homer (his fifteenth) and a double.

The game:  It was scoreless for four innings, and the only serious threat came from the Indians.  They put men on first and third with none out in the fourth and had the bases loaded with two out, but did not score.  Cleveland got on the board in the fifth, however, when Coco Crisp hit a two-out triple and Blake followed with a two-run homer.

The Twins bounced right back in the top of the sixth.  Guzman singled and scored on a Rivas triple.  Corey Koskie was intentionally walked, but the strategy backfired as LeCroy hit a three-run homer to put the Twins ahead 4-2.  The Twins added another run in the seventh when Guzman got an infield single, went to third on an error, and scored on Stewart's infield single.  They put it out of reach in the eighth.  Doubles by Jones and A. J. Pierzynski plated one run and Mohr hit a two-run homer, making the score 8-2.

Notes:  LeCroy was again at first base in place of Doug Mientkiewicz.  Stewart was in left, Mohr in right, and Jones at DH.  Denny Hocking pinch-ran for Koskie in the ninth and stayed in the game at third base.  Michael Ryan pinch-hit for Jones in the ninth.

The Blake home run produced the only earned runs Santana had given up in his last three starts.  He had gone eight innings in each.  In 24 innings he had given up 14 hits, 5 walks, and struck out 23.  It appeared that he had shown he belonged in the starting rotation.

During the off-day on August 18, the Twins had dropped back to third place.  With this win, however, it was shaping up to be quite a three-team race.  A race of mediocrity, some might say, but a race nonetheless.

Record:  The Twins were 64-61, in third place, 1.5 games behind Kansas City.  They were a half game back of second-place Chicago.