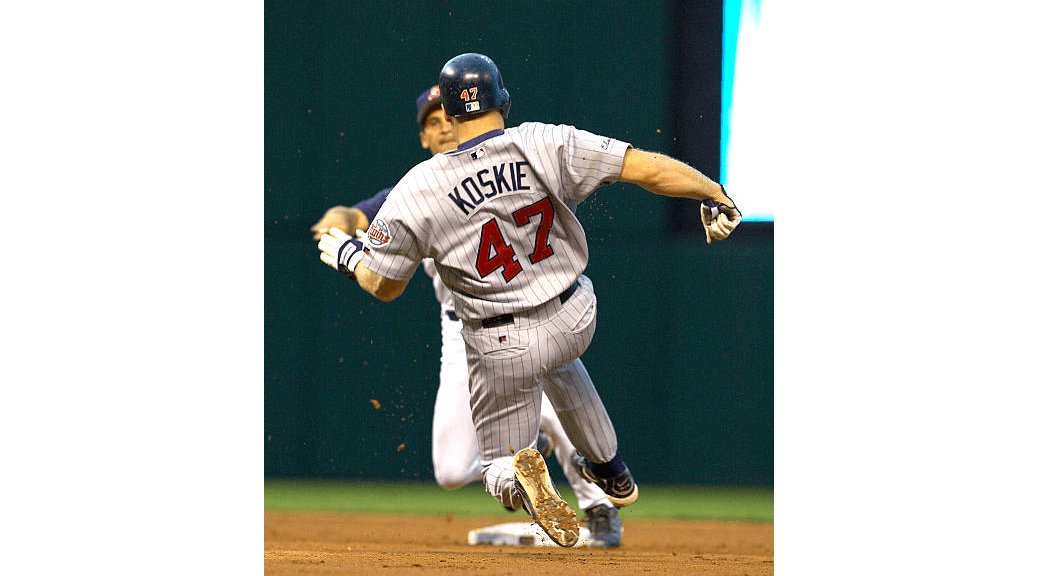 The game:  The Twins took control early.  In the second LeCroy doubled, A. J. Pierzynski was hit by a pitch, and Ryan delivered a two-out three-run homer to give the Twins a 3-0 lead.  A pair of singles, a bunt, and a sacrifice fly put the Angels on the board in the third, cutting the lead to 3-1.

The Twins responded with six in the bottom of the third.  Singles by Shannon Stewart, Koskie, and LeCroy plated the first run.  Jacque Jones had a run-scoring double and Hunter hit an RBI single.  Ryan walked to load the bases and Cristian Guzman hit a three-run triple to put the Twins up 9-1.  The Twins kept it going in the fourth.  Luis Rivas singled and scored on a Koskie triple.  LeCroy walked and a double play scored a run.  Hunter then walked and scored on Pierzynski's single to make the score 12-1.

Anaheim got a few back in the fifth.  Wooten and Delgado singled, Figgins had an RBI double, and DaVanon had a two-run single to cut the lead to 12-4.  It stayed there until the eighth, when Trent Durrington walked and RBI doubles by Adam Riggs and Figgins made it 12-6.  That was as close as the Angels would come.

Notes:  LeCroy was at first base in place of Doug Mientkiewicz.  Stewart was in left, Ryan in right, and Jones at DH.

With a blowout game, there were numerous substitutions.  Dustan Mohr replaced Hunter in center field in the fifth.  Lew Ford replaced Stewart in left in the seventh, his first appearance with the Twins since July 13.  Chris Gomez pinch-hit for Rivas in the seventh and stayed in the game at second base.  Rob Bowen replaced Pierzynski behind the plate in the eighth.  Michael Cuddyer pinch-hit for Jones in the ninth, his first appearance for the Twins since May 7.

Lohse pitched seven innings, giving up four runs on twelve hits and a walk, striking out one.

Brad Thomas made his first appearance as a Twin since 2001.  He allowed two runs on two hits and a walk in one inning.  He did strike out two.

Jesse Orosco made his first appearance as a Twins, twenty-five years after having been drafted by them in 1978.  As you probably know, he was traded to the Mets for Jerry Koosman in February of 1979.  The Twins got him back at the August trade deadline in 2003 for a player to be named (Juan Padilla).

The White Sox and Royals both lost, so the Twins gained a game on both of their rivals.

Record:  The Twins were 72-66, in second place in the American League Central, one game behind Chicago.  They were one game ahead of third-place Kansas City.