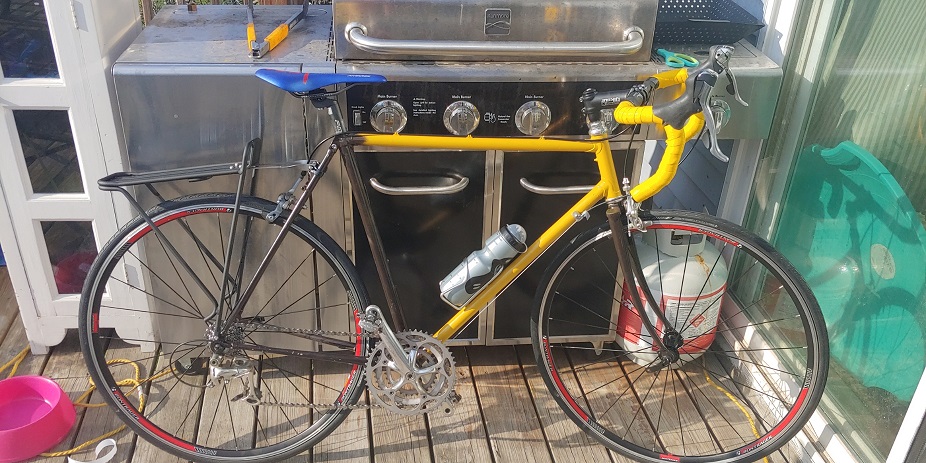 As I've mentioned before I both refurbished my bike and was diagnosed with Type 2 diabetes. Both events lit the proverbial fire under me in terms of getting the exercise I just hadn't been getting enough of.  Overall, its been a great success! I was in pretty bad shape as of 2-3 years ago and had plateaued after only losing about ten pounds. This summer, though, I've pushed that weight loss to over 50 pounds and am on the verge of dropping below 200 lbs for the first time in over a decade. I look and feel pretty amazing. I've been working up my riding to where I am doing about 80-100 miles per week, or so, although I feel a bit like I've plateaued on gainz there, the weight is still coming off. As a result, I am already off of insulin and I'll find out in a couple weeks how my A1C is doing. In short, biking rules.

My second reason for writing this, though, is something of a warning. Shortly after I got out of the hospital, the ring and pinkie finger on my left hand stopped working like they are supposed to. I basically can't move them towards the rest of my fingers. It makes doing simple things like tying my shoes difficult. At first I figured it might be related to the diabetes, but since it was only in my left hand was told that was not the case. I didn't immediately make the connection to the increased amount of cycling I'd been doing. Seems I've come down with a case of cyclsists palsy. I am almost certain I've been putting too much weight on my hands while I ride, so I am starting to look into getting a professional fit done to see if I can alleviate that. (and spreading copious amounts of NSAID gel on my arm). One of the hospitals in Madison does it, so I'm hoping it can be covered by the insurance.

Anyway, moral of the story is, biking rules but do it wisely. Building your own bike from scratch also rules, but you gotta be very cognizant of where you locate everything. Hopefully the damage to my nerve is not permanent, but take a lesson from me here.

(but also, seriously and holy crap, I've lost over 50 lbs and am working on getting to 60. I'm very impressed with myself, ngl.)

28 thoughts on “WGOM Fitness: Progress, but at a cost”