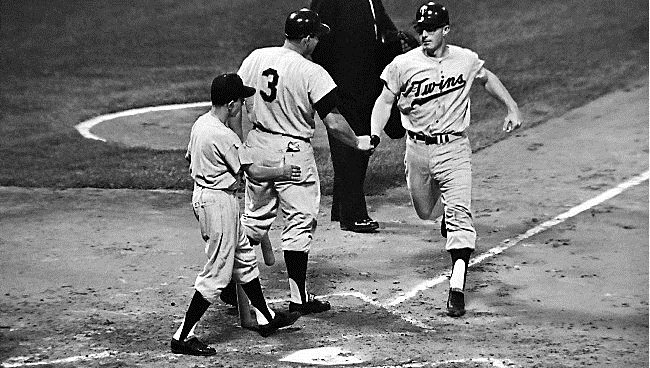 Pitching star:  Ron Perranoski pitched three innings, giving up one run on two hits and no walks and striking out none.

The game:  The Twins took the lead early.  With one out in the first, Carew doubled and scored on an Oliva single.  Oliva was out trying to go to second on the throw home, but Harmon Killebrew walked and Reese hit a two-run homer, putting the Twins up 3-0.  The Yankees loaded the bases in the second but did not score.  With two out in the third, Killebrew singled and scored on a Reese triple.  Jim Holt followed with a single to make it 5-0 Twins.

But of course, against the Yankees, it couldn't be that easy.  In the fourth, Cater doubled, went to third on Munson's single, and scored on a ground out to make it 5-1.  In the fifth, Bobby Murcer singled, went to third on Roy White's double, and scored on a ground out to cut the lead to 5-2.  In the seventh, Gene Michael singled, Jim Lyttle walked, and two-out walks to Jerry Kenney and Murcer made it 5-3.  In the seventh Cater singled, Munson doubled, Ron Woods delivered a two-run single to tie it 5-5.  With two out, John Ellis singled and Woods scored from first to give New York the lead at 6-5.

But the Twins came back in the bottom of the seventh.  Tovar led off with a home run to tie the score.  With one out Oliva doubled, Killebrew was intentionally walked, and Rich Reese reached on an error, loading the bases.  Then came consecutive singles by Rick Renick, Leo Cardenas, and Ratliff, scoring four runs and giving the Twins a 10-6 advantage.  New York did not get a baserunner after that.

Notes:  Holt was in left in place of Brant Alyea.  Ratliff was behind the plate in place of George Mitterwald.

Renick pinch-hit for Holt in the seventh and stayed in the game in left field.  Frank Quilici replaced Killebrew at third base in the ninth.

Dick Woodson allowed two runs in two-thirds of an inning and had an ERA of 10.80.

Bill Zepp started and pitched 5.1 innings, giving up three runs on seven hits and two walks and striking out two.  He would go back to the bullpen after this start, rejoining the rotation on July 6.

Stan Bahnsen started for the Yankees.  He pitched three innings, allowing five runs on seven hits and a walk and struck out none.

Bill Rigney replaced Killebrew with Quilici a lot, which of course is a perfectly understandable move.  It's interesting, though, that I don't think he has yet replaced him until Killebrew was unlikely to get another at-bat, no matter how big the Twins' lead was.  In this game, for example, the Twins took a 10-6 lead in the seventh.  But with Killebrew likely to bat in the eighth, Rigney left him at third, and did not make the defensive move until the ninth.

Record:  The Twins were 30-13, in first place in the American League West, 2.5 games ahead of California.