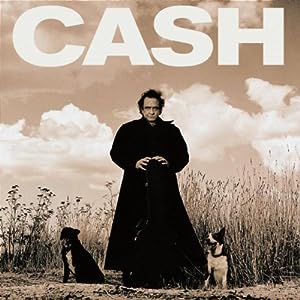 Johnny Cash has been one of my musical influences since I was a wee lad, basically because my dad was a big fan of Johnny Cash and the first albums I was exposed to were Johnny Cash recordings. My favorite was Live at San Quentin and I would listen to that album over and over. As a smartass teenager, my friends and I would goof on the fact that Johnny played the song San Quentin two times in a row on that album and how much it would suck if a band like Kiss would play a song like Beth two times in a row at a concert.  With his TV show and old hits, Johhny Cash was a big star in the 1970s.

However by the time American Recordings came out in 1994, Johnny’s career was pretty much tapped out. Of course he could’ve always just played the casino circuit, singing his hits and Cashing in on the nostalgia but a bearded rap producer named Ric Rubin would have none of that.  Rubin convinced Johnny to just play songs in his living room, accompanied by nothing but his own acoustic guitar. The result was not only stunning but resurrected Johnny’s career and brought a whole new legion of fans to his music.

On the surface, American Recordings was surprising more for its sparseness and “folky” tenor than for its subject matter. It was Johnny Cash stripped down to the bare necessities: that clear, deep voice and an acoustic guitar. Peeking underneath that surface, however, brought about another image – that of a man acknowledging his own mortality; worried about sins both past and present with the understanding that those sins have called into question his standing in the afterlife. Songs like Delia’s Gone, The Beast in Me, 13, and Down There by the Train tell the tale of a man who has grievously sinned. Cash is not proud of these sins – he doesn’t boast or shrug them off. Instead there is the sad recognition that sin is the price man pays for its humanity.

American Recordings kicked of a certain format that we would see throughout the American Recordings sessions. A few originals, one or two old standards, and a couple of offbeat covers that Johnny makes his own. The latter in American Recordings is a cover of the Danzig song 13. In the end the album is about sin and redemption. Johnny is telling us that we are all sinners but that there is a way out, we can seek redemption. Cash ends the album with The Man Who Wouldn’t Cry, a song that addresses the need for humility as it describes a hard-scrabbled man who lives a life of unsentimentalized failures and only finally through his tears is able to enter into heaven and gain all he lost on earth. Johnny would mine these fields even deeper in his next American Recordings Albums.

One can listen to American Recordings and dwell on the themes of sin and redemption or one can just listen to Johnny sing a bunch of old timey songs in a way that only Johnny Cash could do. It’s why these albums are so popular and why, when Johnny Cash dies nearly 10 years later, hipsters and old folks alike lament his passing and his preacher-like image graces the cover of Time Magazine.

Going to the University of Minnesota in the early- to mid-1980’s meant that I had a front row seat to the “Golden Age” of the local music scene. Any day of the week you could easily see the Suburbs, Soul Asylum, Husker Du, The Phones, The Wallets, heck sometimes even Prince, and a host of other great bands that have slipped into the mists of time. However my personal favorite was by far The Replacements, a band that I easily saw more than 50 times. The album that put the Replacements head and shoulders above all the rest was Let it Be.

From the iconoclastic Beatles-esque title, to the cover of Paul, Bob, Tommy, and Chris sitting on the roof of a porch of a typical SW Minneapolis home, to the snarky song about MTV, the album perfectly captures the feel and sense of 1984. What is great about this album, however, is its timelessness. Even though I couldn’t imagine this album being recorded at any time other than 1984, the album doesn’t feel dated some 27 years later.

The album kicks off with I Will Dare which was easily the Replacements biggest hit and most accessible song. Through this song, a lot more people were brought into the Replacement’s fold and, like Pretenders, helped with the ladies as you could play this Replacements song and not clear the dance floor (important when you are in college!).

The following three songs, Favorite Thing, We’re Coming Out, and Tommy Got His Tonsils Out were classic Replacements rockers full of Bob’s furious guitar work and Paul’s smart assy lyrics. Androgynous is a switch as a piano-led, slower tempo song. It was right before Let It Be came out that Paul was hanging out with Peter Buck of REM (That’s Buck's mandolin playing on I Will Dare) and we saw them once running around at First Avenue with eye liner. Needless to say that my friend Pete and I used eyeliner a lot that summer when we went out.

Black Diamond was the first cover recorded by the Replacements and it was perfect as they played the song straight but in an “ironic”way so that anyone in the know would get the joke. Seen Your Video, with its three lines (Seen your video/it’s phony rock and roll/we don’t want to know) was also spot-on as by this time MTV had been taken over by slick, expensively-produced videos usually from fey English bands that didn’t have room for guitars. Finally I think Gary’s Got a Boner would be considered a classic rock and roll song if it wasn’t for its goofy subject matter.

The songs Unsatisfied and 16 Blue were probably the most lauded songs and really shone a spotlight on Paul’s song maturing writing skills. Even though I was 21 at the time, I wasn’t that too far removed from 16 and understood 16 Blue's significance completely. The Replacements were playing these songs live for a few months prior to the release of the album and at that time we knew that their next album was going to be something special.

Let It Be really demonstrated what the Replacements were and could be. It was an exciting time as it appeared that they were on their way to superstardom. Unfortunately they were about 10 years too early. If this album had been released in 1994, they would have been bigger than Nirvana. This album some kicked off what some consider the Holy Trinity of Replacements’ albums: Let It Be, Tim, and Pleased to Meet Me. Many consider Tim the definitive album, and I respect that opinion but for meaning and musical enjoyment, Let It Be will always be one of my fave’ things.

My daughter turns 18 in a few days and we will send her off to college three weeks later.  Since most WGOM citizens have younger children or are just starting families, I thought it would be interesting to hear from someone on the backend, someone who successfully (I think) raised up a kid and is preparing to send her out into the world.  What I write below is based on my experiences raising a daughter (and a nearly 16 year old son) but also from talking/venting with friends and relatives with similar aged kids.  The following is both advice and just top of the head rambling.

I’ve said this before but it bears repeating:  Girls are harder than boys.  Girls are harder on their moms than their dads, although your mileage may vary.  This just isn’t our experience but the experience of all of our friends who have both boys and girls.  I think it’s because girls (and their mothers) generally are more emotional.  There’s more drama involved with girls than with boys.  Issues that are a BIG DEAL to girls and moms get shrugged off by males.  It’s not a bad thing (especially for us dads), but something that you (and particularly your wife) will have to deal with, especially once your daughter hits about age 10.

The flip side of course is that girls are closer to their mothers.  It seems counterintuitive I know but the fact that moms and daughters battle one another means that they have a closer relationship.  There are things that my daughter tells her mother that she wouldn’t dream of telling me, and not just issues related to “women’s personal hygiene.”   So being a father to a teenage daughter is kind of a mixed bag.  You are relieved that you don’t have the battle scars your wife does, but you kind of envy the bond that those scars form.

END_OF_DOCUMENT_TOKEN_TO_BE_REPLACED

Sunday mornings I like to listen to jazz, drink black coffee, and read the New York Times. While not exactly jazz, this is a great Sunday morning selection.

Possibly the best song ever about killing children.

Some great pop from the greatest band ever.  Until their reunion shows last year, live versions of GBV were hard to come by, now there's literally pages of vids, some of even decent quality.

Since GBV was highly prolific, I thought I would be as well, so enjoy to your heart's content after the break

END_OF_DOCUMENT_TOKEN_TO_BE_REPLACED

A kiss off song that would make a young Dylan proud.  Careful, a naughty word gets sung twice in this song.  The Wedding Present have a pretty good version too, but I couldn't find a version on You Tube.

One of my favorite bands.  I was disappointed that there really isn't a lot of high quality live vids out there.  This one definitely gives you a taste of the band if you're not familiar with them.

Elvis made it famous, but Hound Dog was written for Big Mama Thornton.

Plus Elvis' most notorious version after the break
END_OF_DOCUMENT_TOKEN_TO_BE_REPLACED

Let's play some rock and roll.  From VH1 Rock Honors, stick around to the 6:10 mark, where things get fun.