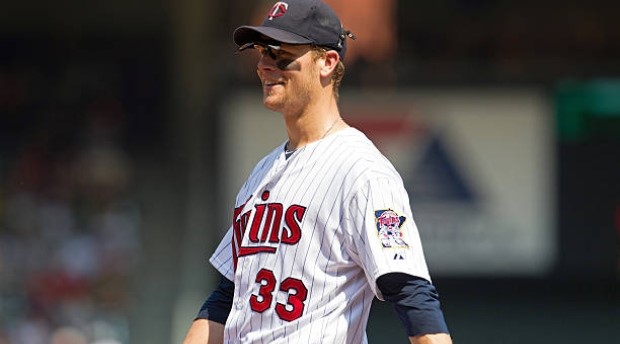 Pitching star:  Rick Reed pitched seven innings, giving up one run on six hits and a walk and striking out five.

The game:  The Twins offense provided the Fourth of July fireworks.  In the second, Torii Hunter singled and Morneau hit a two-run homer.  The Indians got one back in the third when Milton Bradley walked and scored from first on a double by Jody Gerut.  But the Twins scored two more in the bottom of the third Doug Mientkiewicz walked and Koskie hit a two-run homer.

The offense continued in the fourth.  Dustan Mohr walked, Guzman doubled, and Luis Rivas hit a two-run single.  Singles by Bobby Kielty and Mientkiewicz loaded the bases, and an infield out made the score 7-1.  They added two more in the fifth.  Mohr walked, A. J. Pierzynski singled, and Guzman hit a two-run double to put the Twins lead at 9-1.

That was pretty much it.  Cleveland tacked on a run in the eighth but never threatened to get back into the game.

Notes:  Mohr was again in left field in place of Jacque Jones.  Kielty was in right and Morneau was the DH.

By game scores, this was Reed's best game in nearly two months.

Indians players in this game who had Twins connections include Matt Lawton, Casey Blake, and Terry Mulholland.

Alex Herrera had come up on July 1.  This was his third game.  He had an ERA of zero through four innings.  He would be unscored upon in his next four appearances.  He would then give up seven runs in 1.1 innings in his next three appearances, be sent to the minors, and would never make it back to the big leagues again.  He was only twenty-three.  He would play in the minors through 2006 and played in a variety of foreign leagues, both summer and winter, through 2015.

Record:  The Twins were 44-41, in second place in the American League Central, 2.5 games behind Kansas City.  They were just two games ahead of third-place Chicago.