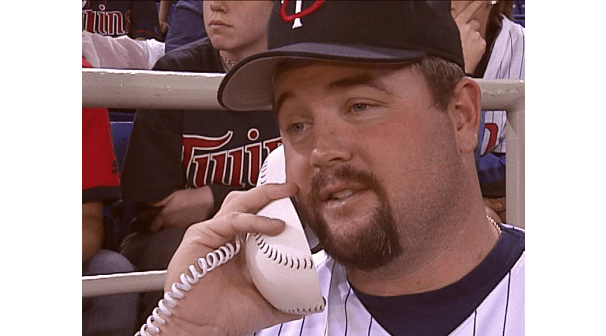 The game:  The Twins jumped out to an early lead.  Shannon Stewart walked and Mientkiewicz doubled, putting men on second and third with one out.  A strikeout followed, but then Corey Koskie hit a two-run single, went to second on a wild pitch, and scored on a Torii Hunter single to make it 3-0.  Mohr homered in the fourth to make it 4-0.

Detroit got on the board in the fifth when Monroe homered, but the Twins got the run back in the bottom of the fifth when LeCroy homered.  The Tigers got back into it in the sixth.  Sanchez led off with a single and went to second on a wild pitch.  Young then delivered a two-out RBI single followed by Monroe's run-scoring double, cutting the margin to 6-3.

That was as good as it would get for Detroit.  The Twins scored one more, in the seventh, when Mientkiewicz walked, went to second on a passed ball, and scored on LeCroy's single.  The Tigers had men on second and third with two out in the eighth, but did not score again.

Notes:  LeCroy was behind the plate in place of A. J. Pierzynski.  Stewart was in left, Mohr in right, and Michael Cuddyer at DH.  There were no in-game lineup substitutions.

Santana didn't pitch badly, but he ran into trouble in the sixth.  His line was 5.2 innings, three runs, four hits, two walks, and five strikeouts.

The relievers for Detroit were Chris Mears, Erik Eckenstahler, Matt Anderson, and Matt Roney.  That's the kind of bullpen that leads you to be 38-116, which was the Tigers' record after this game.

The Twins had now won eight straight.  The White Sox lost to the Royals, so the Twins edged closer to clinching the division. 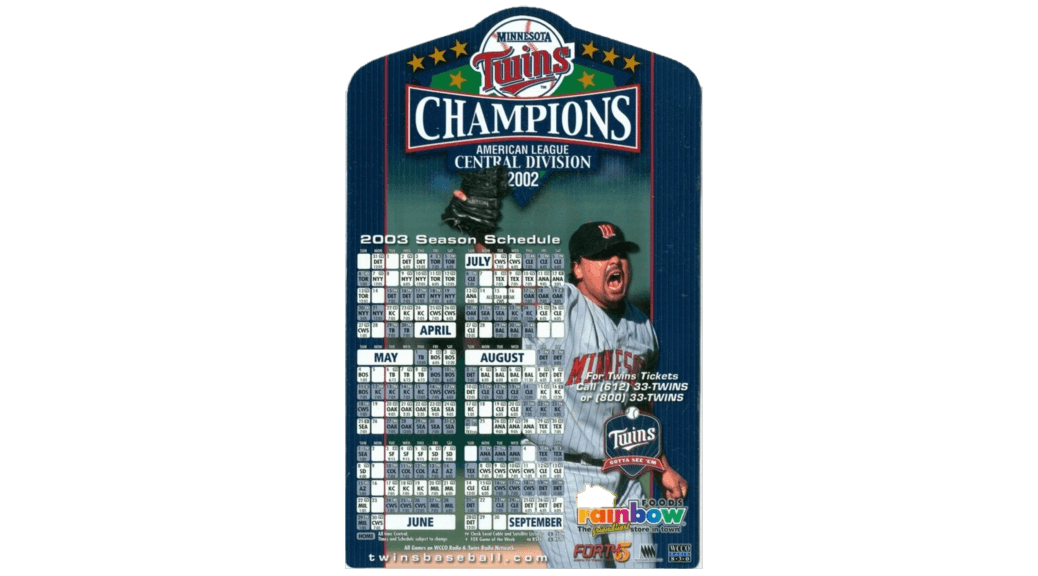 Opposition stars:  Mark Loretta was 4-for-5 with two runs and two RBIs.  Ryan Klesko was 3-for-4 with a two-run homer (his eleventh, two doubles, and a walk.  Sean Burroughs was 2-for-4 with a walk.  Donaldo Mendez was 2-for-4.  Gary Matthews was 2-for-5 with a home run (his third) and two runs.  Brian Buchanan was 1-for-1 with a two-run homer, his third.  Brian Lawrence pitched eight innings, giving up four runs on nine hits and no walks and striking out five.

The game:  The Padres put men on second and third with two out in the first but did not score.  The Twins put men on first and second with two out in the second but did not score.  San Diego got on the board in the third.  Matthews led off with a home run.  Singles by Mark Kotsay, Loretta, and Burroughs plated another, making it 2-0 Padres.  The Twins got one of them back in the fourth on consecutive one-out singles by Mientkiewicz, LeCroy, and Denny Hocking, cutting the lead to 2-1.

The Twins went ahead in the sixth.  Hunter led off with a single and Mientkiewicz followed with a two-run homer, making it 3-2 Twins.  The lead lasted until the seventh.  With one out Loretta singled, Klesko doubled, and an intentional walk loaded the bases.  LaTroy Hawkins gave up a single to Dave Hanses to tie the score, but got out of the inning without further damage.  Hunter then homered with one out in the eighth, giving the Twins a 4-3 lead.

But in the bottom of the eighth, it all fell apart.  Keith Lockhart walked and Matthews singled.  A bunt put men on second and third with one out.  Loretta singled home two and Klesko hit a two-run homer, making in 7-4 San Diego.  Micheal Nakamura then came in and gave up a single to Burroughs and a two-run homer to Buchanan, making it 9-4.  The next two batters went out, but it was too little, too late.  The Twins got a pair of one-out singles in the ninth but could do no more.

Notes:  LeCroy was behind the plate in place of A. J. Pierzynski.  Denny Hocking was at third in place of Corey Koskie.  Lew Ford was in right.

Tom Prince came in for LeCroy in the eighth.  Dustan Mohr and Bobby Kielty were used as pinch-hitters for pitchers.

Mays lowered his ERA to 5.21.  That was the lowest it would be the rest of the season.

Juan Rincon gave up a run in a third of an inning to make his ERA 2.88.

Record:  The Twins were 35-26, in first place in the American League Central, 4.5 games ahead of Kansas City. 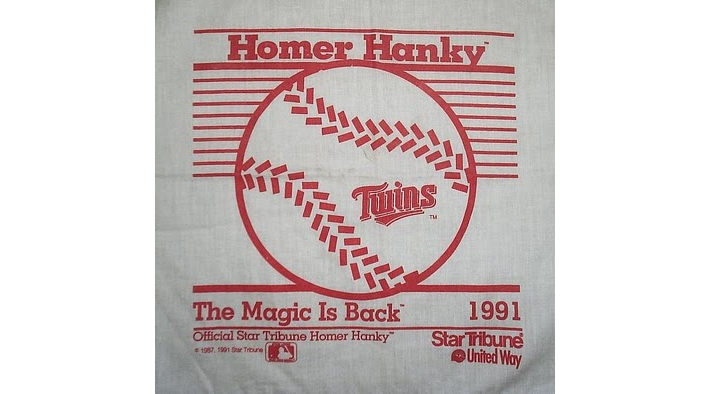 The game:  Well, the Twins got off to a good start.  Gladden led off with a bunt single, Chuck Knoblauch walked, and Puckett delivered an RBI single, giving the Twins a run before anyone was retired.  A double play and a ground out took them out of the inning, though, and it was all downhill from there.

With one out in the bottom of the first, Palmeiro singled and Ruben Sierra doubled.  A ground out held the runners at second and third and gave the Twins hope, but the hope was dashed as Gonzalez hit a two-run double and Stanley followed with an RBI single, putting the Rangers up 3-1.

The Twins opened the second with a single and a walk, but a double play again took them out of the inning.  They got men to second and third with one out in the third, but again could not tally.

Texas added a run in the third on singles by Buechele, Stanley, and Mario Diaz.  The Rangers put it out of reach in the fourth.  Downing led off with a walk, Palmeiro singled, and Sierra's sacrifice fly made it 5-1.  Franco had an RBI triple and scored on Gonzalez' single and the score was 7-1.

Hrbek hit a two-run homer in the fifth to cut the margin to 7-3.  The Twins put men on second and third in the seventh but could not bring them home.  Texas padded their lead with a two-run triple by Downing in the bottom of the seventh and a two-run homer by Franco in the eighth.

The Twins tried to rally in the ninth.  Gladden led off with a single, Knoblauch walked, Puckett singled, and Hrbek walked, forcing in a run and leaving the bases loaded with none out.  "Leaving the bases loaded", however, is exactly what the Twins did, as Kenny Rogers came in to strike out Chili Davis, get Brian Harper on a short fly ball, and strike out Pedro Munoz to end the game.

Notes:  Munoz was in right field.  Al Newman was at third base.  Scott Leius came into the game in the eighth inning to play shortstop, replacing Greg Gagne.

Anderson lasted just 3.1 ininngs, allowing seven runs on eleven hits and a walk and striking out two.  It was his third poor start out of four, and his ERA was up to 5.20.

Paul Abbott relieved Anderson, making his 1991 debut.  He had made seven starts for the Twins in 1990.  He did not pitch particularly well, either, going 3.1 innings and giving up two runs on three hits and four walks.  He did strike out three.  He would stay on the team until mid-August, then come back as a September call-up.

Terry Leach finished up.  He had his second consecutive bad game, pitching 1.1 innings and allowing two runs on one hit and a walk and striking out three.  Over his last two games, his ERA rose from 2.08 to 3.66.

The Twins stranded twelve men and were 2-for-15 with men in scoring position.

The Twins had lost three in a row, seven of eight, and nine of twelve.

I'd forgotten that Kenny Rogers spent his first four major league seasons in the bullpen.  In fact, he led the league in appearances with 81 in 1992.  He would become a starter the following season, 1993, jumping from 78.2 innings to 208.1.  He would remain in a major league rotation through 2008, when he was forty-three.  He was clearly on the down side by then, but he had an excellent season in 2006, when he was forty-one:  He went 17-8, 3.84, 1.26 WHIP and finished tied for fifth (with Joe Nathan) in Cy Young voting.  For his career, he was 219-156, 4.27, 1.40 WHIP.  That may not sound super, but he was in a major league rotation for sixteen consecutive seasons and made thirty or more starts in fourteen of them, and that's pretty good.

Record:  The Twins were 20-24, in sixth place, mere percentage points ahead of seventh-place Kansas City.  They were 7.5 games behind first-place Texas and one game behind fifth-place Chicago.