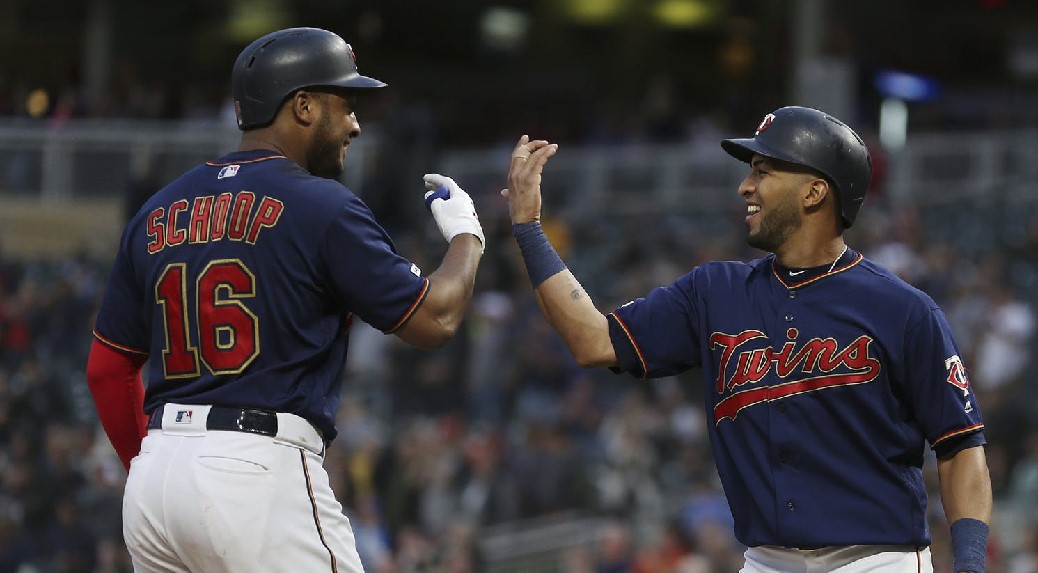 Batting stars:  Jorge Polanco was 3-for-3 with two doubles.  Jonathan Schoop was 1-for-4 with a two-run homer, his twelfth.  Jason Castro was 1-for-3 with a home run, his eighth.

Opposition stars:  Domingo Santana was 3-for-5 with two runs.  Mallex Smith was 2-for-4 with a walk and two runs.  Kyle Seager was 2-for-5.  Edwin Encarnacion was 1-for-3 with a three-run homer (his twenty-first) and two walks.  Mike Leake pitched seven innings, giving up three runs on six hits and no walks and striking out six.

The game:  The Mariners put together a pair of two-out singles and Encarnacion hit a three-run homer in the third to give Seattle a 3-0 lead.  The Twins tied it in the fourth.  Eddie Rosario led off the inning with a double, and with two out Schoop and Castro hit back-to-back homers, tying the score at 3-3.

The Mariners got the lead back in the fifth.  A pair of walks preceded an RBI single by Dan Vogelbach to make it 4-3.  Seager's run-scoring single in the seventh increased the lead to 5-3.

The Twins took their only lead, but the only lead they would need, in the eighth.  Max Kepler and Polanco led off the inning with back-to-back doubles to cut the lead to 5-4.  Nelson Cruz walked, a fly out put men on first and third, and a wild pitch tied the score 5-5.  With two out, Marwin Gonzalez delivered a single that scored Cruz and put the Twins up 6-5.  All they needed to do was retire Seattle in the ninth to win the game.

And they did, but it wasn't easy.  Smith and Santana led off the inning with singles, putting men on first and second with Encarnacion at bat.  But he was caught looking at a third strike (the game log indicates it may not have been a correct call by the umpire), Vogelbach popped up, and Seager hit a fly to left.  Victory was ours.

Notes:  Gonzalez was at first base, replacing C. J. Cron.

I don't really understand why Duffey was not allowed to go more than one inning.  Not that going to Harper is a dumb move or anything, but it means the Twins used four relief pitchers last night when they could perhaps have gotten by with three or even two.  I still don't really understand how Rocco makes his bullpen decisions.  I don't mean that as critically as it might sound--I'm sure he has reasons for what he does, and he's not obligated to explain them to me.  And I actually like that he seems to be responding to specific situations rather than just reflexively going to "the ninth inning guy" or "the eighth inning guy".  Also, I have to say that for the most part, whatever he's doing seems to be working.  The Twins have bullpen problems, but I think Rocco has made the best of the situation so far.

Martin Perez appears to have regressed to the mean.  Over his last six starts, he has an ERA of 5.59, not far off his ERA of 6.22 last season.  I don't know how to calculate FIP, but the eye test tells me he has not been particularly unlucky.  His first few starts as a Twin are looking more and more like a mirage.  If he really was doing something different, as the media kept telling us, it looks like it didn't take long for the league to figure out what it was.  He'll probably keep getting starts, though, because the Twins have nothing in AAA to replace him with other than possibly Devin Smeltzer, and there's certainly no guarantee that Smeltzer would be better.  I assume Falvey and Levine are looking for help, just as I assume they're looking for bullpen help  I have no idea what might be available or at what cost.  But the Twins need better pitching if they're going to make a deep playoff run.

Record:  The Twins are 44-21, first in the American League Central, 10.5 games ahead of Cleveland.

Batting stars:  Max Kepler was 2-for-3 with a walk.

Pitching star:  Fernando Romero struck out two in a scoreless inning, giving up a hit and a walk.

The game:  The Twins opened the bottom of the first with walks to Kepler and Jorge Polanco.  Nelson Cruz then hit a very hard smash right at shortstop Correa, who turned it into a double play.  That was pretty much the last chance the Twins had.

The game didn't fall apart right away.  The Astros were hitting lots of balls hard from the start, but between atom balls and good defense they didn't score until the third, when Marisnick was hit by a pitch, stole second, and scored on a Springer double.  Houston left the bases loaded in the fourth, but scored two more in the fifth.  Springer led off the inning with a home run to make it 2-0.  Jose Altuve then doubled, went to third on an infield single, and scored on a sacrifice fly to make it 3-0.

Then the roof fell in, if Target Field actually had a roof.  In the sixth Robinson Chirinos singled and Marisnick hit a two-run homer.  With two out, Bregman homered, Brantley doubled, and Correa had an RBI single, making the score 7-0.  In the eighth, Springer walked and Tyler White singled.  With one out, walks to Brantley and Correa brought home a run.  Reddick had an RBI single, Aledmys Diaz had a sacrifice fly, and an error brought home another run, bringing the score to 11-0.

The Twins offense was basically doing nothing through all this.  They did not get a hit until the sixth, when Kepler doubled.  They loaded the bases in the eighth but did not score.  And that was pretty much it.

Notes:  Ehire Adrianza was at third base, with Marwin Gonzalez on the bench.

Ryne Harper pitched two-thirds of an inning, giving up no runs on one hit.  His ERA is 2.31.

For the most part, I've thought Rocco has handled the pitching staff fairly well, but he did a couple of things in this game that left me scratching my head.  The first is letting Pineda start the sixth inning.  The Astros were hitting shots off him from the first inning on, and it was just good defense and good luck that kept the Twins somewhat in the game through five innings.  It was suggested in the game log that Rocco was hoping to get another inning out of Pineda to save the bullpen, but as has been said many times, hope is not a strategy.  There was no real reason to think Pineda would get through the sixth, and in fact he didn't even record an out.  All we accomplished by letting him start the sixth is to make sure the game was out of reach before we went to the bullpen.

I'm sure that, when Rocco did go to the bullpen, the plan was to use Magill for two innings and Mejia for two innings.  Magill didn't exactly blow anyone away, but at least he filled up his innings.  Mejia couldn't even do that.  I can't fault Rocco for pulling Mejia.  It's one thing when a pitcher is getting hit hard--you figure that eventually either they'll hit some balls at people or they'll get tired of running around the bases and get themselves out.  But when a guy can't throw strikes, there's not much you can do but take him out.

What I don't understand, though, is why he went to Harper in that situation.  Harper has done well enough not to be considered a blowout pitcher.  You had Romero available, and in fact they went to him in the ninth.  Why not bring him into the game in the eighth?  If he can't throw 1.2 innings of a blowout game, why is he on the team?  Harper can probably pitch again tonight, but probably not for more than one inning.  Had they used Romero, Harper would be available for two or three tonight.  I don't understand it.

It should be pointed out, of course, that the way the Twins batted last night they could've brought in Sandy Koufax in the sixth inning and it wouldn't have made any difference.

It's a long season, and you'll have games like this once in a while.  The point is not to have very many of them.  Let's come back strong tonight!

Record:  The Twins are 17-10, first in the American League Central, 1.5 games ahead of Cleveland. 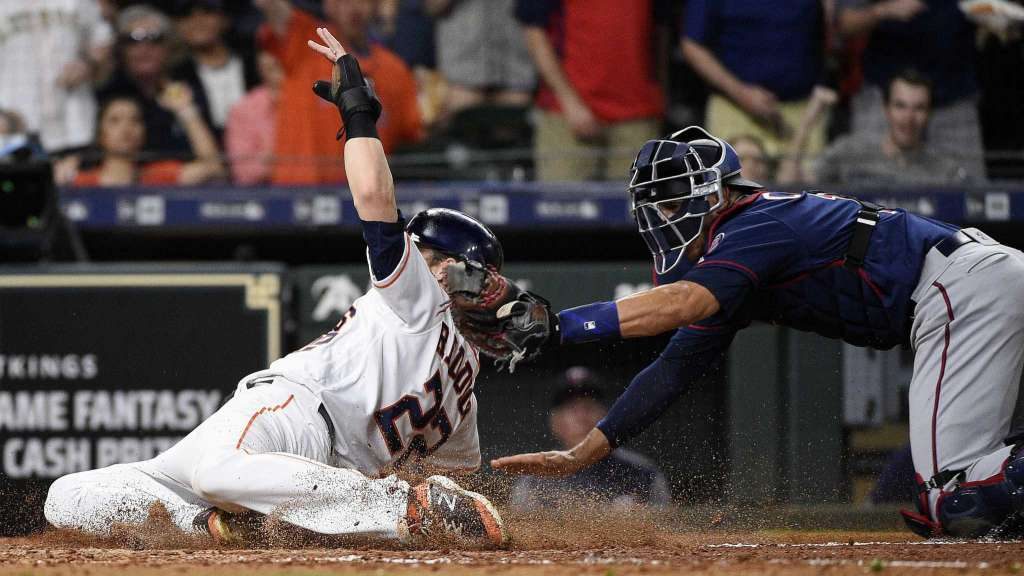 Opposition stars:  Josh Reddick was 3-for-4.  Tyler White was 2-for-2 with a double and two walks.  Michael Brantley was 2-for-5 with a home run (his fourth) and two runs.  Carlos Correa was 1-for-5 with a three-run homer, his fourth.

The game:  The Twins took the lead in the first inning, as two-out singles by Cruz and Eddie Rosario and a two-run double by C. J. Cron gave them a 2-0 lead.  Castro led off the second with a home run, making the score 3-0.  It stayed 3-0 until the fourth, when Brantley led off with a single, went to second on a ground out, and scored on Reddick's single to cut the lead to 3-1.

The Twins seemed to take control of the game in the sixth.  Jonathan Schoop doubled and Castro walked.  With two out, Max Kepler singled, Polanco had a single-plus-error, and Cruz singled.  Four runs scored, putting the Twins up 7-1.  Brantley led off the bottom of the sixth with a homer, making the score 7-2, but the Twins still seemed to have the game well in hand.

In the seventh, however, George Springer led off with an infield single and Alex Bregman drew a one-out walk.  Brantley lined out, but Correa hit a three-run homer, making the score 7-5 and putting the Astros right back into the game.

In the eighth, Polanco took them right back out of it.  With two out and none on, Kepler walked and Polanco hit a two-run homer, making the score 9-5.  Houston did not get a man past first base after that and the victory was secured.

Byron Buxton was caught stealing.  If I'm reading it right it's the first time he's truly been "caught stealing" in his career, in the sense of the catcher gunning him down rather than oversliding the bag.  I guess it had to come sometime.

Harper giving up runs had to come sometime, too.  Has his bubble burst, or was this just a blip?  Time will tell, but I'm hopeful.  It looks like the home run was the only ball hit hard off him.  And as great as his story has been, it wasn't realistic to think he was going to pitch all season with an ERA of zero.  I guess we'll see.

It was mentioned in the game log that perhaps Rocco is relying too heavily on Rogers and Hildenberger.  I don't think I agree.  Rogers has appeared in ten games and pitched 11.2 innings.  Hildenberger has appeared in eleven games and pitched 7.2 innings.  Given the number of off-days we've had, that doesn't seem like too much to me.  They've each pitched on consecutive days three times and never on three consecutive days.  I actually think Rocco has done a pretty good job of using his whole bullpen, including using Mejia in the eighth inning last night.  It's something to keep an eye on as the season progresses, but I really don't have a problem with it so far.

Someone said in the game log that, going into this series, they were simply hoping the Twins would take one of three.  I was pretty much in that same place.  Now, of course, we hope they will take at least two, if not more.  We'll see.

Record:  The Twins are 13-7, in first place in the American League Central, 1.5 games ahead of Cleveland.