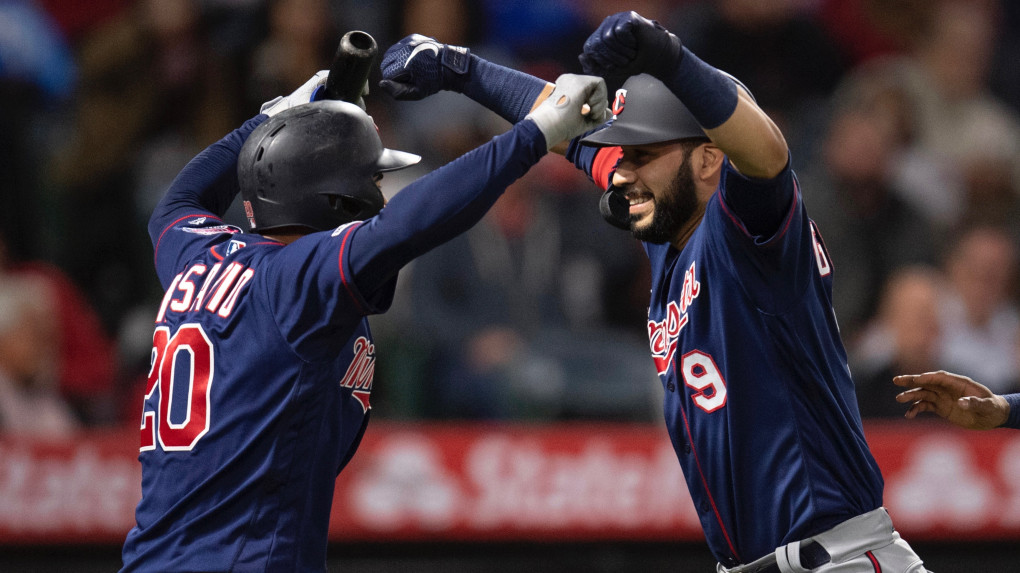 Opposition stars:  David Fletcher was 3-for-3 with a walk.  Mike Trout was 1-for-3 with a home run (his eleventh) and a walk.  Trevor Cahill struck out five in five innings, giving up one run on two hits and two walks.

The game:  Trout homered with one out in the first inning to get the Angels up 1-0.  In the second, with two out and none on, Brian Goodwin walked, Luis Rengifo singled, Fletcher had an RBI single, and a wild pitch scored another run putting Los Angeles up 3-0.  Meanwhile, the Twins did not get a hit until the fifth inning and did not get a man past first base in that time.  It was not looking good.

No worries.  Kepler led off the sixth with a double, leading the Angels to remove starter Cahill.  Polanco followed with an RBI double and Gonzalez hit a two-run homer, tying the score at 3-3.  The Twins took control in the seventh.  Jason Castro was hit by a pitch and was on first base with two out.  Kepler then singled, Polanco had an RBI single, Gonzalez hit a run-scoring double, and Rosario delivered a two-run single, leaving the Twins ahead 7-3.  Arraez added a home run leading off the eighth.

Meanwhile, Twins starter Pineda had really settled down, allowing only one hit after the second inning.  Four relievers held Los Angeles at bay over the last three innings--their only threat was in the ninth, when they put men on first and second with two out, and nothing came of it.

Notes:  Gonzalez was the DH in this game, with Arraez manning third base and Miguel Sano on the bench.  Jason Castro caught back-to-back games, which I believe is only the fourth time all season he has done that.

Pineda really pulled himself together after the second inning.  In the second, he looked like he was all over the place and had very little command.  I went to bed soon after that and assumed he would not be in the game much longer.  Instead, he pitched very well from innings four through six.  That makes four starts in a row in which he has pitched competently.  None of them has been outstanding--he's given up three runs in each and his highest game score is sixty-one--but he's pitching about as well as you expect a fifth starter to pitch.  There's a chance he may still improve, but if he can just stay where he is he's helping.

I said that if Arraez is going to be here he should play, and he has been, so good job Rocco Baldelli.  Of course, the fact that he's gone 7-for-12 with a home run, a double, and two walks makes it a lot easier to play him.  He won't keep that up, of course--that would be a record--but he's certainly off to a good start.

I assume it was mentioned during the broadcast, or maybe some of you even remember, but Bard is a former Twin.  He was in their system from 2012-2018, reaching Rochester in 2017.  He was chosen by the Angels in the rule 5 draft before the 2018 season but was returned to the Twins in late April.  He became a minor league free agent after the season and signed with the Angels.  He had been pitching well for them, but obviously did not do so last night.

Who'd have thought that with about thirty percent of the season gone, the Twins would be winning two-thirds of their games?

Record:  The Twins are 32-16, first in the American League Central, 6.5 games ahead of Cleveland.