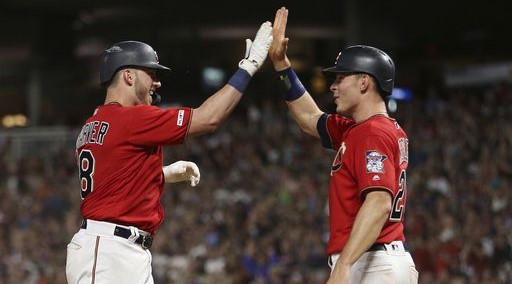 Batting stars:  Ehire Adrianza was 2-for-4.  Mitch Garver was 1-for-4 with a two-run homer, his eleventh.

Pitching stars:  Kyle Gibson pitched eight shutout innings, giving up two hits and no walks and striking out six.  Taylor Rogers pitched a perfect inning and struck out one.

The game:  This really was an old-fashioned pitchers' duel.  There was not even a real threat to score until the fifth, when MIguel Sano reached on an error with one out and Adrianza singled.  A double play took the Twins out of the inning.  The Twins put men on first and second in the sixth when Byron Buxton was hit by a pitch and Max Kepler walked, but a strikeout, a pair of fly outs ended that threat.  In the seventh, Sano and Adrianza were again on first and second with one out, and again a double play ended the inning.

Finally, in the eighth, the Twins said, "Enough of this."  Kepler drew a one-out walk, and with two down Garver hit a two-run homer for the only runs of the game.  The Royals went down in order in the ninth.

Notes:  Adrianza was at shortstop, with Jorge Polanco at DH and Nelson Cruz out of the lineup.

Buxton was hit on the wrist by a pitch.  Apparently he's day-to-day.  I've said this before, but I'm always worried about hand and wrist injuries in a batter.  It seems like players and teams never let them heal properly.  Everyone, including the player, says that the player can play, and in fact he can.  He just can't play well, especially at the plate.  The Twins have a big division lead and Kepler can cover center field for a while.  He's not going to be as good as Buxton there, but he'll get by.  Let's give Buxton enough time for the wrist to be fully healed before we run him back out there.

Gibson apparently did not have any command issues last night.  He did not walk anyone and threw just eighty-eight pitches in eight innings.  He could have pitched the ninth, but Rogers has been the Twins' most reliable relief pitcher and hasn't pitched for a while.  Plus, had Gibson started the ninth and someone reached base, Rogers would have come in anyway, and most pitchers (and managers) prefer having the reliever start the inning if possible.  So, a perfectly understandable decision and, as it turned out, a good one.

Record:  The Twins are 46-22, first in the American League Central, eleven games ahead of Cleveland.