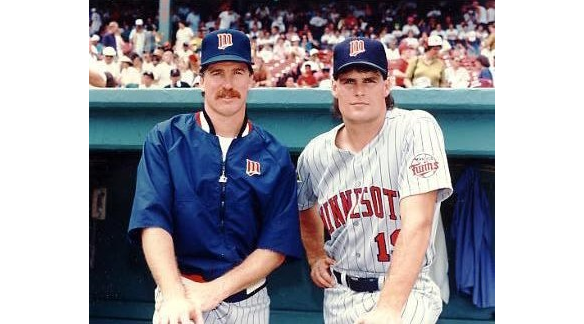 Batting stars:  Shane Mack was 1-for-3 with a walk.

Opposition stars:  Todd Stottlemyre pitched 6.1 innings, giving up one run on four hits and three walks and striking out none.  Candy Maldonado was 1-for-2 with a walk.  Devon White was 1-for-3 with a double and a walk.

The game:  The Blue Jays scored both of their runs in the first inning.  White led off with a double.  A sacrifice/fielder's choice put men on first and third.  A ground out made it second and third, and a walk to John Olerud loaded the bases.  A sacrifice fly scored one and Maldonado's single brought home another, making it 2-0 Toronto.

The Twins put men on first and second in the second but did not score.  That was their only real threat until the seventh, when Gene Larkin led off with a double and scored on a Paul Sorrento single.  Jarvis Brown pinch-ran for Sorrento and went to second on a ground out.  With two out Randy Bush singled, but Brown was thrown out trying to score.  That was the last chance to tie the game the Twins had.

Notes:  Larkin was at first base in place of Kent Hrbek.  Junior Ortiz was behind the plate in place of Brian Harper.

I'm not sure I understand the play that ended the seventh inning.  Brown was on second with two out.  The play-by-play for Bush's at-bat says, "Single to C (ground ball); Brown out at Hm (C-3B).  The best I can figure out is that Bush hit a dribbler out in front of the plate and was safe at first.  Brown then took to big a turn around third base, was trapped off, and was tagged out.  I'm not sure if that's what happened, but it's my best guess.

The White Sox lost to Seattle 2-1, so despite the loss, the Twins clinched the division.

Record:  The Twins were 92-63, in first place in the American League West, eight games ahead of Chicago.

Boston lost to Milwaukee, putting the Blue Jays in first place by 4.5 games.