Opposition star:  Willie Bloomquist was 2-for-4.

The game:  Stewart led off the bottom of the first with a double and scored on a pair of ground outs to give the Twins a 1-0 lead.  In the second Jones and Gomez opened with singles and a double play scored a run.  Guzman then doubled and scored on a Stewart single to make it 3-0 Twins.  Hunter homered in the third to give the Twins a 4-0 advantage.

It looked like that would hold up, as the Mariners did not get a man past first for six innings.  With two out in the seventh, however, Mike Cameron doubled, Ben Davis walked, and Mark McLemore hit a two-run double.  Bloomquist singled to put men on the corners, and consecutive RBI singles by Ichiro Suzuki and Randy Winn tied the score.

The Twins put men on first and third in the seventh but did not score.  In the eighth, however, singles by Hunter and Jones again put men on the corners, and this time Gomez delivered an RBI single to put the Twins ahead 5-4.  Seattle went down in order in the ninth.

Notes:  A. J. Pierzynski was back behind the plate after missing a couple of games.  Gomez remained at third in place of Corey Koskie.  Stewart was the DH.

Justin Morneau pinch-hit for Luis Rivas in the seventh and walked.  Denny Hocking pinch-ran for him and stayed in the game at second base.

LaTroy Hawkins gave up a run in a third of an inning and raised his ERA to 2.64.  Juan Rincon struck out both men he faced to drop his ERA to 2.96.

Joel Piniero started for the Mariners and pitched 6.2 innings.  He gave up four runs on ten hits and a walk and struck out three.

Edgar Martinez walked and singled.  In both cases he was forced at second base.  He did not bat again, as John Mabry pinch-hit for him in the seventh.  I don't know if Martinez injured himself sliding into second or if something else was going on.  He would miss the rest of the series, but would be back in the lineup after that.

Record:  The Twins were 49-49, in second place in the American League Central, 5.5 games behind Kansas City.  They were a half game ahead of third-place Chicago. 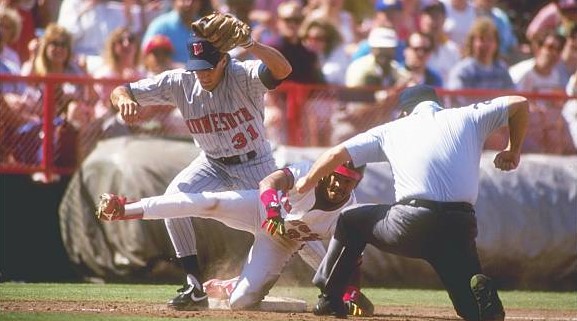 The game:  Martinez led off the game with a single, went to second on a ground out, and scored on an O'Brien single to give the Mariners a 1-0 lead.  Each team missed a chance in the second.  In the third O'Brien hit a two-out single and scored on Buhner's double to make it 2-0 Seattle.

Each team put a man on second in the fourth but neither scored.  The Twins had two on in the sixth and the Mariners loaded the bases in the seventh, but the score remained 2-0.  The Twins finally got on the board in the seventh when Mike Pagliarulo doubled and scored on Knoblauch's two-out single.  Seattle came right back in the eighth.  Dave Cochrane singled, and with two out Martinez had an RBI double and Reynolds had a run-scoring single, putting the Mariners ahead 4-1.

Notes:  Shane Mack was in left field, with Dan Gladden out of the lineup.  Gene Larkin took Mack's place in right.  Knoblauch was the leadoff batter, with Bush batting second.  Bush replaced Chili Davis in the DH slot.  Newman was again at shortstop in place of Greg Gagne.

It seemed odd that Schooler had not had a decision before this game, but he missed the first half of 1991, not appearing in his first game until July 12.  He had five saves to this point.

Edgar Martinez was the leadoff batter for Seattle in this series.  It was his second full season, and he was still primarily a third baseman at this point.  He batted leadoff 67 times in 1991 and was good at it.  He didn't steal any bases, which is no surprise, but he batted .307 as a leadoff batter with an OBP of .405.  He would move down to (primarily) the number two spot in 1992 and would not return to the number one position.

The White Sox did not play and Oakland defeated California 2-1, so those two teams moved in to a "virtual tie" for second place.

Record:  The Twins were 74-49, in first place in the American League West, six games ahead of Chicago and Oakland.