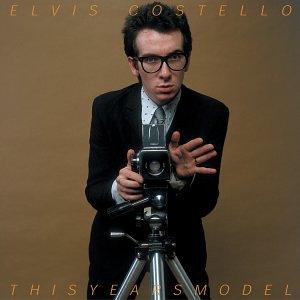 My momma has always said that if your nom de punk includes the name Elvis, you better have the songs to back it up. After the solid debut of My Aim Is True, Elvis Costello was determined to avoid the dreaded sophomore slump so Elvis came out with both guns ablazin’ in this 1978 release and it is just as furious and fierce as anything the Clash were putting out at the time which is not bad considering that it’s most memorable instrument is a Farfisa Organ. In short, Elvis Costello did have the songs worthy of his name.

From its opening line of “I don’t wanna kiss you, I don’t wanna touch….. you” to the slamming “radio radio!" that closes the album, Elvis is spittin’ mad as his serpent’s tongue spews out song after song about fashion, relationships, and modern radio. Musically the album is spare with guitar, bass, that wonderful organ, and a simple drum backing. It’s Elvis’ first album with the Attraction and they provide nice background vocals and a tight midsection. Very little overdubs or studio tricks here. This album is lean, muscular, and cutting. And I loved every second of it.

When Elvis Costello made that famous SNL appearance in late 1977 I was watching at a friend’s house with his mom. Here comes Elvis with the nerdy Buddy Holly glasses, tight jeans, and a spastic, frantic stage presence playing Pump It Up. My friend’s mom thought it was a skit and was incredulous when we told her that no it was a real act. Later during the second song when Elvis stopped the first few bars of Less Than Zero and played Radio Radio instead, I was hooked. Unfortunately it took me a couple more years to finally buy this album. When I switched over to CD’s it was one of the first CD’s I ever bought. I probably have played it at least once a month for some 30 years and never get sick of it. Whatever other musical genre I was currently into, whether it be punk, country, folk, jazz, old school rock and roll, Gregorian chant, sea shanty’s, etc., This Year’s Model has always been there.

Radio Radio of course is a favorite. I saw Elvis Costello play at the Myth nightclub a few years back and he played this song perfectly.   Costello has probably played this song thousands of times over the past 30 years and to still just lay it down with such fury and conviction was just incredible. Unfortunately part of the reason may be that its words ring more true today than they did in 1978. Can you think of a verse that describes today’s commercial radio any better than this:

You either shut up or get cut up/They don't wanna hear about it/It's only inches on the reel-to-reel/And the radio is in the hands of such a lot of fools/Tryin' to anaesthetize the way that you feel!

For that line alone, This Year’s Model is deservedly a classic album and worthy of a place on your turntable, discplayer, Ipod, or Spotify playlist.